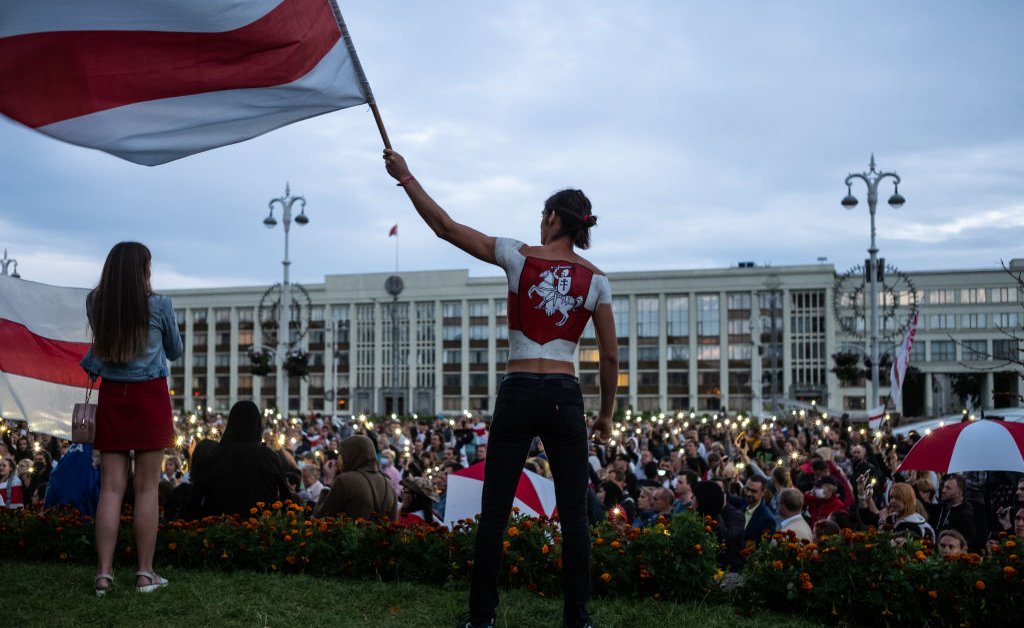 The tens of thousands of demonstrators demanding the ouster of Belarus President Alexander Lukashenko and an end to 26 years of his authoritarian rule can expect little more than rhetorical support from the United States, Trump administration officials say.

While some U.S. diplomats have argued for imposing sanctions on Lukashenko’s regime, U.S. intelligence officials have concluded he is likely to remain in power despite this month’s allegedly rigged election because he retains the support of the leadership of the nation’s military, internal security, government-controlled news media, and intelligence services. In addition, intelligence officials in the U.S. and Western Europe say, Russia’s foreign and military intelligence agencies have, in the words of one European official, “thoroughly penetrated or intimidated their comrades in Belarus.”

Although the European Union is set to impose sanctions on 15 to 20 Belarusian officials for rigging the election, there is little or nothing the U.S. and the EU can do to alter the reality on the ground, officials on both sides of the Atlantic say. “The last thing we want to do is encourage another doomed uprising like the one in Hungary,” says the European official, referring to the failed 1956 uprising against the Soviet Union in what then was a satellite of Moscow.

Allowing the defeat of a popular pro-democratic uprising, however, would underscore the inability of Western Europe’s democracies to influence events on their eastern borders and the Trump Administration’s unwillingness to combat authoritarian leaders. Coupled with Russia’s land grabs in Ukraine and meddling in the Balkans, it underscores the potential vulnerability of other former Soviet republics such as the Baltic states, though they are now NATO members.

Although Russian President Vladimir Putin dislikes Lukashenko, the officials said, he may use Russian support for the Belarus leader to force him to sign a long-sought union agreement between Moscow and Minsk, the nation’s capital, which would in effect push Russia’s western border to Poland and Lithuania. What’s more, says a U.S. diplomat, by throwing his weight behind the incumbent, “Putin can watch a pro-democracy movement that’s too close for comfort die, and tightens his political grip on top of the economic stranglehold Russia already has on Belarus, all without firing a shot.”

Still, officials haven’t ruled out the possibility that if the unrest continues, Putin might send Russian forces into Belarus to crush the protests, oust Lukashenko, impose the union agreement, and install a new ruler more to his liking.

On Aug. 24, Deputy Secretary of State Stephen Biegun met with Svetlana Tikhanovskaya, the top Belarusian opposition leader, in Vilnius, the capital of neighboring Lithuania, a former Soviet satellite that is now a member of NATO and the EU. But he offered only lukewarm support for the weeks-long uprising that has seen more than 100,000 people join one protest in Minsk and thousands of workers at multiple state-owned factories go on strike.

Following the meeting, Biegun told reporters that its purpose “was to listen, to hear what the thinking of the Belarusian people is and to see what they are doing to obtain the right to self-determination,” he said, adding: “The United States cannot and will not decide the course of events in Belarus.”

An official statement issued by the State Department the day of the meeting mentioned it only after describing Biegun’s meetings with Lithuanian officials “to discuss the situation in Belarus, countering the threats posed by Russia and the People’s Republic of China, and the promotion of human rights and democracy.” The statement added that Biegun had met the Belarusian opposition leader and “affirmed the U.S. commitment to Belarus’ sovereignty and territorial integrity and to the sovereign right of its people to elect their own leaders and determine their own future.”

So far, Trump has said only that the U.S. is closely watching what he called a “terrible situation.” Three days after the election, White House press secretary Kayleigh McEnany said the administration was “deeply concerned by the Belarus presidential election” and urged Lukashenko’s government “to respect the right to peaceably assemble and to refrain from use of force.”

Some U.S. officials who favor greater support for the uprising in Belarus concede that the administration’s tepid response is rooted more in reality than it is in the president’s lack of interest in human rights, his friendship with Putin, his admiration for authoritarian leaders, or his preoccupation with domestic problems, including a pandemic and his own re-election campaign.

“It’s true that the president is paying little if any attention to events in Belarus and that there is nothing that even resembles a U.S. policy,” says one U.S. official in Washington. “But I have to admit that in this case that may not be such a bad thing, because the alternative would be to try and almost certainly fail” to change the outcome in Minsk.

Even some congressional Democrats who favor economic sanctions concede that more economic pressure is unlikely to oust Lukashenko because Belarus is dependent on Russia for energy and markets for its manufactured goods. Connecticut Democratic Sen. Chris Murphy, for example, is calling for the Senate to make a symbolic statement by blocking the nomination of veteran diplomat Julie Fisher to be the first U.S. Ambassador to Belarus since 2008, when the U.S. imposed sanctions on Belarus for human rights violations.

“While I support greater ties between the United States and Belarusian people, now is not the time to be elevating the diplomatic relationship with Lukashenko’s government,” Murphy said in a statement.

After 26 years in power, Lukashenko has shown no such restraint. On Aug. 23, he was filmed getting out of a helicopter wearing body armor and carrying an automatic rifle. Two days later, as schoolteachers led another protest, two leaders of the protest movement were sentenced to 10 days in jail and the country’s supreme court rejected the opposition’s allegations of election fraud.