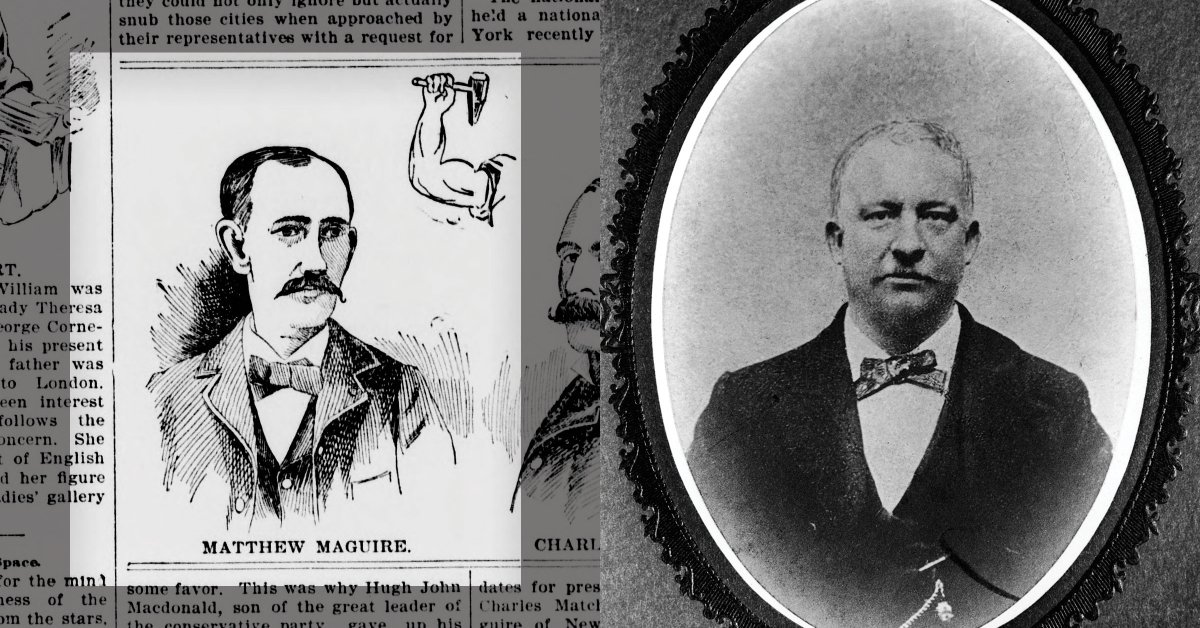 But exactly who should count as the “founder” of Labor Day, which is celebrated on the first Monday in September, has been the subject of debate since the 1890s.

The two men who get the most credit are Peter J. McGuire and Matthew Maguire, who not only have similar-sounding names, but were also both active unionists of Irish descent who lived in New Jersey and campaigned for an eight-hour workday. McGuire is often credited for coming up with the idea of Labor Day and outlining its purpose, while Maguire (whose first name sometimes appears spelled as “Mathew”) is often credited for executing the idea.

The first known Labor Day Parade was held in New York City on Sept. 5, 1882—more than a decade before Labor Day became a national holiday—and was organized by the Central Labor Union; it drew between 10,000 and 25,000 attendees. Even that one event bore the touches of both McGuire and Maguire. The AFL-CIO says it was Peter McGuire who introduced a resolution at a Central Labor Union meeting earlier that year calling for a street parade of workers on the first Monday in September, but according to the New Jersey Historical Society it was Matthew Maguire—secretary and one of the leaders of the Central Labor Union—who sent out announcements of the parade and invitations to attendees, and rode in the carriage leading the parade.

In one area, at least, the two men differed. While Maguire is said not to have talked about his position in Labor Day history often, McGuire asserted his role clearly in the 1897 article “Labor Day—Its Birth and Significance” in the American Federationist. In the piece, he wrote that at a Central Labor Union meeting on May 8, 1882, he “urged” the “setting aside one day in the year” for a “Labor Day.” He envisioned the holiday would be celebrated by a grand “street parade” to “show the strength and esprit de corps of the trade and labor organizations,” followed by a celebratory picnic. Labor Day, he wrote, would be a time to “honor the toilers of the earth, and pay homage to those who from rude nature have delved and carved all the comfort and the grandeur we behold.”

But given that McGuire wrote his account 15 years after the first Labor Day parade, some experts suggest there may have been other factors in play—or one factor in particular: in the intervening years, Matthew Maguire had run for Vice President.

“Because the AFL was very non-political, the fact that Mathew Maguire had the effrontery to run as the Vice Presidential candidate on the National Socialist Labor Party ticket in 1896 erased his chances of recognition as the father of Labor Day,” wrote Ted Watts in the booklet The First Labor Day Parade, suggesting that Maguire was deliberately left out of the narrative because the union had decided that McGuire’s politics were more in line with the image they wanted to project.

Indeed, while McGuire held similar “radical” views as a young man, he had “modified” them as he got older, gaining the reputation of being “an important member of the union establishment,” U.S. Department of Labor historian Jonathan Grossman wrote in 2001. Furthermore, a Sept. 4, 1967, Morning Call article reported that the Socialist Labor Party was opposed to Labor Day in general, believing it detracted from May Day, which it considered the superior workers’ holiday.

That said, Maguire had his proponents too. The Sept. 6, 1891, edition of the socialist newspaper The People reported that “the first great labor day parade…was arranged by the Central Labor Union through the instrumentality of its first Secretary, Matthew Maguire.” Researchers at MyHeritage, who recently investigated the question of Labor Day’s founding, dug up a Paterson News article from July 10, 1896—a year before McGuire’s account—reporting that “Maguire claims to be the author of Labor Day” and, “It was he who first issued a proclamation as secretary of the Central Labor Union for a labor festival.” In 1897, William McCabe, the Grand Marshall of the first Labor Day parade, recalled that Maguire had suggested the parade. Books on the history of holidays and popular customs, like the 1898 book Curiosities of Popular Customs and the 1912 book The Days and Deeds, have likewise credited Maguire with executing the first Labor Day and coordinating with various labor groups. And MyHeritage also showed TIME a typed document from Holy Sepulchre Cemetery, stating that Maguire was interred on Jan. 1, 1917, at the age of 65, and including the handwritten comment, “This man founded Labor Day.”

Perhaps no moment illustrates the tensions between the two camps so well as what happened when the pen that President Cleveland used to sign the legislation making Labor Day a national holiday was given to AFL head Samuel Gompers, who was McGuire’s friend. A July 2, 1894, editorial headlined “Honor to Whom Honor is Due” in the Paterson, N.J., newspaper the Morning Call reported that local labor union representatives believed Matthew Maguire, by then an alderman in the city, deserved the pen instead, for being ” the undisputed author of Labor Day as a holiday.” The dueling narratives of the first Labor Day continued to face off throughout the first half of the 20th century.

By the 1950s, it appeared that one story may have prevailed. In August 1952, a memorial to Peter J. McGuire went up in Pennsauken, N.J. Four years later, President Dwight D. Eisenhower invited McGuire’s descendants to the White House for the unveiling of a labor-themed U.S. postage stamp.

But over the years, questions over details in both accounts have only heightened the confusion.

Grossman, the Labor Department historian, has written that T.V. Powderly, Grand Master Workman of the Knights of Labor, claimed Peter McGuire “allegedly admitted that his name might have been mixed up with that of Matthew Maguire.” In the late 1960s, Maguire’s granddaughter Doris Atherton gave the Paterson Morning Call her copy of Maguire’s 1917 obituary which said, “while it is not generally known, the deceased was in reality the originator of the national holiday known as ‘Labor Day.’” She claimed her father told her that Peter McGuire was present at the bill signing, and when President Cleveland congratulated him, it was only because he confused the two men; she also claimed that Cleveland sent her grandfather “a letter of apology,” since lost, “telling him that he deserved credit for the idea of Labor Day.”

Furthermore, around Labor Day 1968, the Paterson Morning Call argued that the May 8, 1882, meeting in which McGuire supposedly called for a parade never even occurred in the first place—and if it had occurred some other day, that it wouldn’t have been the site of the first mention of a Labor Day parade. According to research conducted for the article by George Pearlman, a member of a machinist union of which Maguire had been a part, T.V. Powderly wrote in 1893 that the Knights of Labor of N.Y. (a group that only Maguire was part of) had been quietly discussing the idea for a labor holiday even before 1882.

The frequent misspelling of Matthew Maguire as Matthew McGuire, and the continued misspelling of Maguire’s name in subsequent accounts and directories, led Maguire’s family and supporters to believe that Maguire had been confused for McGuire the whole time.

N.J. Congressman Charles S. Joelson submitted the Morning Call reporting to the congressional record on Sep. 9, 1968, stating that it “indicates conclusively” that Maguire is “the true originator of Labor Day.” That same year, U.S. Secretary of Labor Willard Wirtz declared that “insofar as the Department of Labor is concerned” the “Father of Labor Day” was Matthew Maguire. And in 1972, Maguire descendants founded the Matthew Maguire Association to continue promoting the idea that Maguire founded Labor Day for years to come, a Sept. 2, 1973, Bergen County Record newspaper article, found by MyHeritage, shows.

That research hasn’t tamped down the enthusiasm of McGuire’s supporters, however. The memorial to McGuire was just added to the National Registrar of Historic Places in 2019, and a bill was introduced in Congress to make it a historic landmark. Over the years, unionists have made pilgrimages to McGuire’s grave in Pennsauken, N.J., which also describes him as the “father of Labor Day.”

All these years later, the question may never be resolved for sure—and, in the view of some labor boosters, that’s perfectly fine.

“From available records it is impossible to determine whether Peter J. McGuire or Matthew Maguire, or some other labor leader was the moving spirit,” wrote Grossman. But both can claim some credit for the success of Labor Day. After all, while the New York City parade was “a success,” it didn’t make Labor Day an important American holiday on its own.

“Labor Day is the creation of the labor movement, with the cooperation of local, state, and federal government,” Grossman points out. “Like many ideas and institutions, it was created because its time had come. Because Labor Day met the needs of the age, many men participated in its development.”