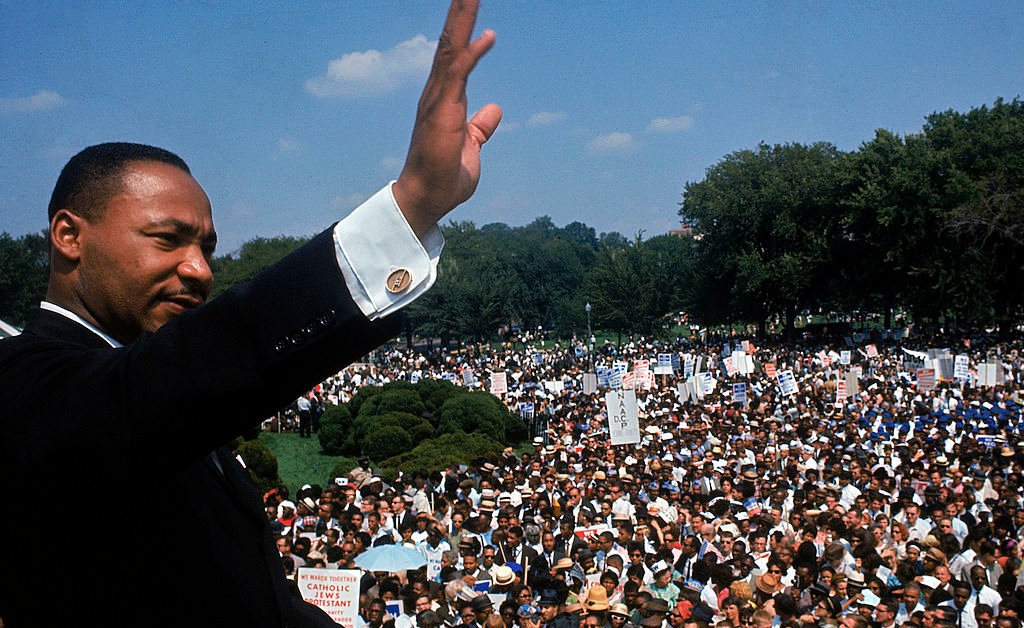 The mass protest that brought Martin Luther King Jr. and some 250,000 others to the steps of the Lincoln Memorial on Aug. 28, 1963, was officially known as the March on Washington for Jobs and Freedom. But within the call for freedom lay many more specific demands, one of which was articulated by Martin Luther King Jr. as part of his “I Have a Dream” speech: “We can never be satisfied,” he said, “as long as the Negro is the victim of the unspeakable horrors of police brutality.”

More than half a century later, it’s clear that satisfaction remains out of reach. For a year when the death of George Floyd catalyzed worldwide Black Lives Matter protests—and a month when the police shooting of Jacob Blake in Kenosha, Wis., reignited calls for justice—Martin Luther King III and Rev. Al Sharpton have organized a March on Washington “in protest of police brutality,” set to take place Friday. Dubbed the “Commitment March: Get Your Knee Off Our Necks,” it will feature families of victims of brutality and call for “police accountability and criminal justice reform.”

And the thread that runs from 1963 to today goes beyond general calls for an end to police brutality. In fact, the image of a knee on the necks of African Americans also played a role in the original event.

A few months before that day, Americans had seen those “unspeakable horrors” when network TV cameras captured police hosing down children and teenagers marching to protest segregation in Birmingham, Ala., that May. “When King sent out his marchers, [Bull Connor, the city’s segregationist commissioner of public safety] had them mowed down by streams from fire hoses,” TIME reported in the issue walking up to the March on Washington. “Shocking news photos splashed across the pages of the world’s press—of a young Negro sent sprawling by a jet of water, of a Negro woman pinioned to the sidewalk with a cop’s knee at her throat, of police dogs lunging at fleeing Negroes.”

The May 7, 1963, New York Times reported, “A Negro woman who resisted a policeman’s attempt to force her off a sidewalk was wrestled to the pavement by five patrolmen, one of whom pinned her down with a knee in her neck.” The writer and activist James Baldwin later recalled that when Black creatives met with Attorney General Bobby Kennedy in response to the police violence in Birmingham, playwright Lorraine Hansberry told Kennedy, “I am very worried about the state of the civilization which produced that photograph of the white cop standing on that Negro woman’s neck in Birmingham.”

The police violence in Birmingham was “the sparking point” for this revolution, and “millions of people—North and South, black and white—felt the fangs of segregation and, at least in spirit, joined the protest movement,” TIME observed.

Birmingham proved a rallying cry that would not only draw people to Washington, but provide inspiration for the day’s speakers. “[When] Bull Connor with his police dogs and fire hoses destroys freedom in Birmingham, he is destroying my freedom in Detroit,” Walter Reuther, President of the United Automobile Workers, told the crowd in his speech that day. John Lewis, the then-23-year-old Student Nonviolent Coordinating Committee chairman and future Congressman, also referenced Birmingham.

But while the events in Birmingham—including that photo of the woman having her neck pinned to the ground—had awakened many white Americans, especially in the North, to the brutal reality faced by Black people, it was hardly the beginning of the story. For Black Americans, Birmingham was one headline-making moment in a long and terrible history.

Sure enough, Lewis’ speech did not stop at Birmingham. He also spoke of the “police state” in Danville, Va., where a call to open more municipal jobs to Black activists had recently turned bloody when police beat protesters with clubs and turned fire hoses on them. Lewis also mentioned the violence facing peaceful protesters in Albany, Ga., and the fact that Marion King, the wife of a movement leader there, had been beaten by police while pregnant in July 1962—after she tried to deliver food to jailed protesters in Camilla, Ga.—and had subsequently lost the baby.

And countless unnamed incidents of police brutality haunted Black Americans’ daily life in the South decades before the March. “Young people at that time were watching police violence in the South, the violence that Freedom Riders had encountered in Alabama and the hundreds of students who went to jail in Mississippi,” says Clayborne Carson, a Stanford University professor who edited King’s papers and attended the original March on Washington. The distinction between the Ku Klux Klan and policemen was not always clear, he adds; when the Klan beat the Freedom Riders on Mother’s Day in May 1961, Connor made excuses about why the police couldn’t be there to stop it.

“Black people were afraid they would lose their lives if they were arrested or confronted by white police officers, and not only [afraid of being] beaten, but women had to be concerned about being raped,” says Karcheik Sims-Alvarado, an assistant professor of Africana Studies at Morehouse College who served as historical adviser to TIME’s VR re-creation of the March on Washington, The March. “There is a long history of intimidation by white law enforcement officials and civilians towards African Americans,” she says.

In fact, on that hot day in 1963, just before launching into the most famous lines of his speech, King acknowledged that many in the audience may have been the victims of countless episodes of police brutality that did not make headlines:

As Carson puts it, “George Floyd wasn’t the first victim.” What’s made a difference today, he believes, is the presence of cell phones and body cams. Images from Birmingham proved just how bad things were; today, such images are easy to record and share.

“I remember being beaten by police in Watts. I didn’t have a cell phone I could pull out. I just took the beating. Had a sore head in the morning, but I felt lucky to be alive,” Carson says. The summer of Black Lives Matter protests in the wake of George Floyd’s death “is far beyond anything I could have imagined in the ’60s,” he says. “The summer of ’63 was a summer of protest, but the scale of what’s happened this summer is larger than that.”