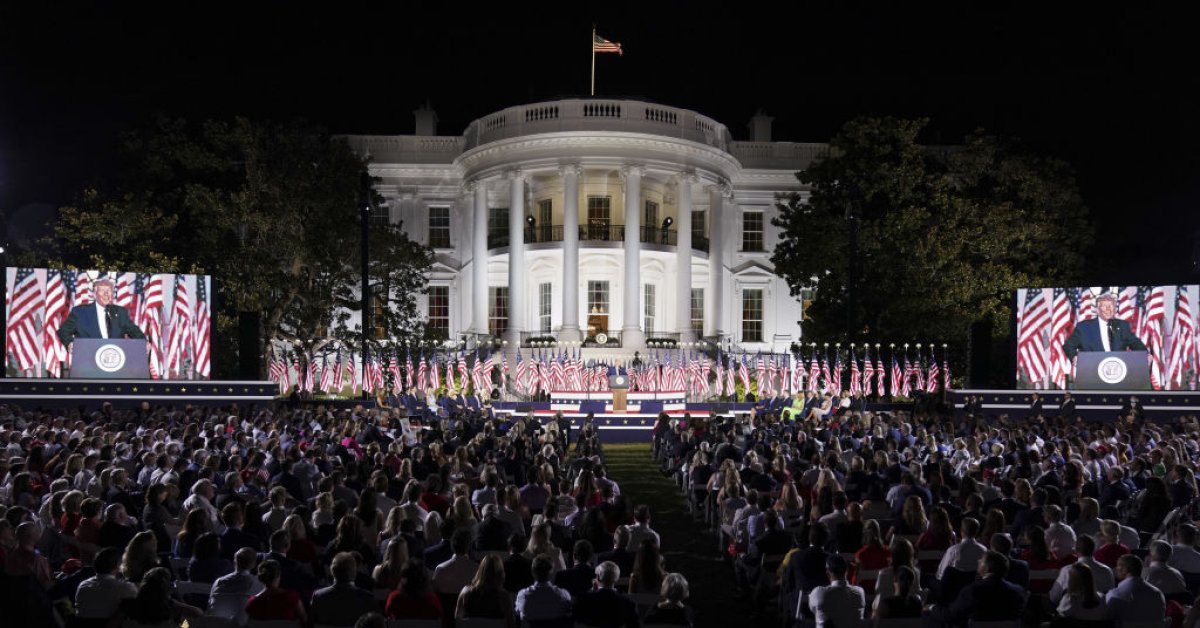 With the Republican National Convention now under our belts, it’s pretty clear which themes President Donald Trump plans to hammer over the next 67 days. His central argument is one of fear: re-elect him — or else. It’s either Trump’s America or some dystopian, socialist tableau of godlessness and violence under former Vice President Joe Biden.

Only that’s the problem. Trump’s message of triumph over terror feels fundamentally at odds with this particular moment. Three and half years after he took the helm, Americans are under siege: a pandemic has sent the economy into a downward spiral, a reckoning on racial justice cannot be ignored, the American West is on fire, cities are on fire but of a different stripe, hurricanes are battering the Gulf Coast, and the White House has become ground zero for flagrant violations of anti-corruption laws.

The convention itself, unfolding on the White House lawn in violation of the Hatch Act, is a manifestation of just how much this moment breaks with tradition and reality. As my colleagues Brian Bennett and Tessa Berenson write, Trump signaled in his acceptance speech Thursday that there are few limits on how he will use the powers of his office. Witness the fireworks exploding over the Washington Monument. As the nation’s death toll from coronavirus topped 180,000, the pyrotechnics spelled “T-R-U-M-P.”

But if historians of authoritarianism and ethics experts were left stammering, they’re not going to determine the election. Voters are. Back-to-back conventions offered a window into how both parties plan to make their case over the next two months. Democrats last week described Biden’s candidacy as one of decency and competency, a check on Trump’s willingness to exploit the federal government for personal gains. Democrats described the widest possible berth for what it means to part of the party. Republicans, in contrast, doubled down on Trump’s base, pulling out a string of discredited allegations and tired assertions that Democrats will coddle socialism, and drawing on racial fears, even as clashes were unfolding in Wisconsin over yet another Black person shot by a white police officer.

Make sense of what matters in Washington. Sign up for the daily D.C. Brief newsletter

But Trump’s 70-minute speech on the South Lawn of the White House — mind-blowing for its extraordinary length, if not for its tonal break with tradition — telegraphed weakness. Where Biden mentioned Trump exactly zero times last week, Trump seemed all but obsessed with his opponent, mentioning Biden by name more than three-dozen times. Trump pitched piousness to Evangelicals and Sunday School Moms, invoked America’s westward expansion under Lewis and Clark, a Manifest Destiny-justified march that came at the expense of the First Peoples, and bragged about his defense of monuments to Confederate figures — a day after Vice President Mike Pence accepted re-nomination as the Republicans’ nominee in a fort used during the Civil War to detain political prisoners suspected to be sympathetic to the Confederacy. But he missed a host of opportunities.

At a time when the President’s appeal among young, non-white men appears to be ticking up, he offered only the most tepid message on race. While the RNC trotted out a seemingly endless line of Black “real Americans,” they seemed designed only to assuage white, suburban voters’ worries that Trump is racist. The President appeared to want it both ways: Black people love Trump! But don’t worry, we’ll keep low-income housing, which disproportionately serves Black people, out of our neighborhoods. (This, of course, demands that voters ignore the reality that more voters of color live in the suburbs than cities.)

All the while, the speakers cast COVID-19, which is still killing close to a thousand Americans a day, as a thing of the past, while Trump claimed a coronavirus vaccine is imminent.

Still, none of this may matter. Incumbency has tremendous power. Trump lags in national polls but is within striking distance when you look at state-by-state breakdowns. And as Hillary Clinton warned last week, Trump could lose the popular vote by millions and still win a second term. Few expected Trump to win four years and yet here we are. As Trump himself observed: “The fact is, I am here. What is the name of that building? … The fact is, we are here and they are not.”