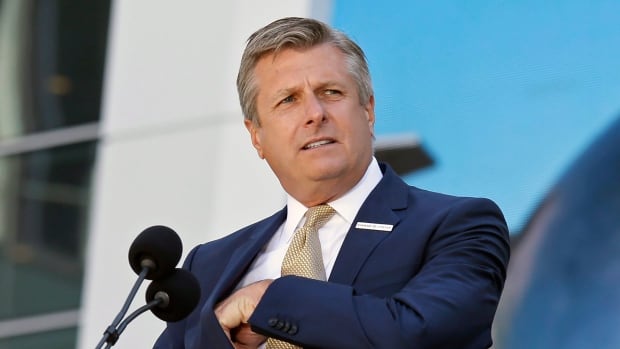 The president of the Golden State Warriors is apologizing to Raptors president Masai Ujiri after a video was released this week showing an altercation between the Toronto executive and a law enforcement officer at the NBA Finals last year in Oakland, Calif.

Rick Welts wrote on Twitter that he is “heartbroken” after watching the video that was part of a countersuit from Ujiri following a lawsuit by Alameda County sheriff’s deputy Alan Strickland.

Welts tweeted that while the team wasn’t responsible for security at Oracle Arena, he wanted to apologize because it happened at a Warriors home game.

The video footage appears to show Strickland using his arm to stop Ujiri from getting to the court.

New video released by lawyers for Raptors president Masai Ujiri shows him being shoved by a sheriff’s deputy while trying to get onto the court to celebrate the team’s NBA championship last year. The deputy claims Ujiri was the instigator and has sued him for injuries. 2:23

As Ujiri tries to walk by, Strickland shoves Ujiri before the two appear to exchange words.

“To my personal and professional friend Masai Ujiri, I am heartbroken seeing the video of what should have been the happiest professional moment of your life,” Welts said on Twitter Friday. “It’s hard to watch and to know all that swirled around you in the aftermath.

“While we had no role in hiring or managing security at our old arena, it happened at a Warriors game and for that I apologize. You rose above it which doesn’t surprise me or anyone who knows you.”

When asked about the video Friday, Los Angeles Clippers head coach Doc Rivers said he was saddened by the officer’s actions towards the Raptors president.

“A man is at the top, the pinnacle of his career at that moment, walking out on the floor to celebrate with his team that just won the NBA championship and he had to be reminded once again what his colour was,” he said.

To my personal and professional friend Masai Ujiri, I am heartbroken seeing the video of what should have been the happiest professional moment of your life. It’s hard to watch and to know all that swirled around you in the aftermath. (1/2)

Ujiri said in a statement Thursday that he was reminded in that moment captured on video that some people will see him as “unworthy of respectful engagement.” He says the reason why is because he is Black.

Sgt. Ray Kelly, a spokesperson for the Alameda County Sheriff’s Office, said Wednesday that the office stands by everything it has said in regards to the investigation.

He added that the video released is “a snippet of all the video that is out there.”

The Raptors coach responds to new video of Masai Ujiri being shoved by an Alameda County sheriff’s deputy. 3:33