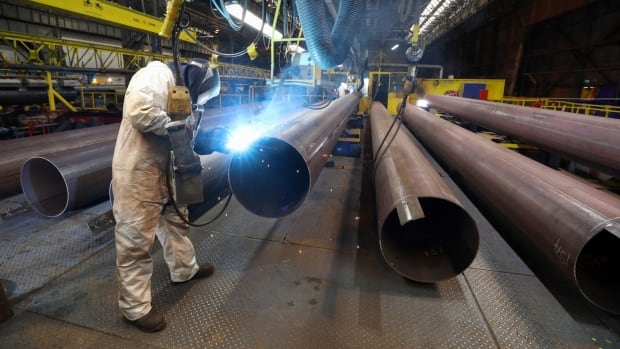 The gap between what the United States buys from the rest of the world and what it sells widened to its highest level since 2008, as imports jumped by a record amount in July.

Data from the U.S. Department of Commerce released Thursday showed that the American trade gap reached $63.6 billion US during the month.

That’s the highest figure since the same month 12 years ago, during the depths of the financial crisis.

The U.S. economy imported $231.7 billion worth of goods from the rest of the world during the month, the highest amount ever and a 10.9 per cent increase from June’s level.

U.S. President Donald Trump has long complained that the trade gap is a sign that other countries are taking advantage of the U.S. by sending more products to the U.S. than they buy from U.S. companies. So his foreign and economic policies have been built around tariffs and import bans designed to making it harder and more expensive to import products, and try to incentivize companies to build items in America.

Canada has been targeted in a number of sectors, most recently aluminum, after Trump slapped a 10 per cent tariff on aluminum products imported from Canada, despite the fact that U.S. aluminum producers can’t produce enough of the metal to satisfy demand.

Trump’s trade policy does not seem to have succeeded in slowing the flow of imports. The U.S. trade deficit with China ballooned 11.5 per cent to $31.6 billion in July, while the goods deficit with Mexico hit a record high of $10.6 billion.

The U.S. trade gap actually hit a record of $80 billion for the month if only goods are factored in. But the U.S. consistently exports more services than it imports, which brought the overall trade gap down.

The United States ran a deficit in goods trade of $80.1 billion in July, the highest on record. The U.S. surplus in services, such as banking and insurance, declined to $17.4 billion, the smallest services surplus since August 2012 and a reflection in part of the decline in airline travel during the pandemic.

TD Bank economist Sohaib Shahid says the numbers show the impact that the coronavirus has had, and continues to have, on the world’s largest economy.

“Exports and imports of goods and services still remain below the levels seen last year, down 20 per cent and 11 per cent from July 2019, respectively,” he said. “There is still a long way to go before trade reaches pre-pandemic levels.”

Rubeela Farooqi, chief U.S. economist at High Frequency Economics, says she expects the uncertainty to continue for a while yet.

“A strong and sustained rebound in trade flows is uncertain given a still weak global growth and demand backdrop,” Farooqi said.