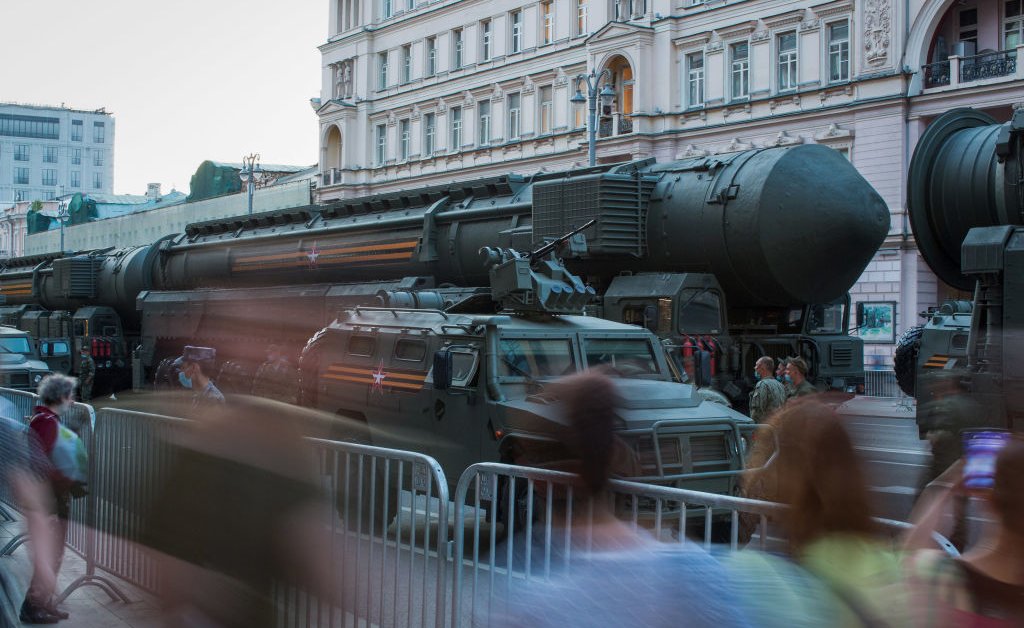 After three years tuning out, turning off, and dropping out of every arms control and trade treaty within reach, the Trump Administration is now seeking a path toward the most sweeping nuclear arms control agreement in history, one that would include all long-, medium-, and short-range weapons.

The Administration took one small step in that direction last week when U.S. Special Presidential Envoy for Arms Control Marshall Billingslea met with his Russian counterpart in Vienna to discuss extending the 2010 New START agreement, which limits both nations’ arsenals of long-range weapons and expires in February.

Though he told reporters in a press briefing following the meeting that the two sides “remain far apart on a number of key issues,” Billingslea had quietly shelved a key U.S. pre-condition for the deal — that any extension of the treaty must include China — in an earlier interview as an apparent olive branch before the talks.

Current and former defense officials argue the existing agreement allows both nations to field more nuclear weapons because it does not count those carried by strategic bombers. These officials also say New START’s verification and compliance requirements need to be tightened, citing Russia’s violations of the Reagan-era Intermediate-Range Nuclear Forces (INF) Treaty, which expired last August. The Trump Administration abandoned the treaty on Oct. 20, 2018, 10 months before it expired, because Russia had violated it by deploying medium-range cruise missiles within range of U.S. NATO allies.

Any new agreement must include giving both sides real-time access to one another’s telemetry data, U.S. defense officials argue, which would allow the parties to track any missile flights and provide on-site inspectors faster access to test sites.

The U.S., for its part, is only beginning to modernize its nuclear arsenal, which still includes the B-52 strategic bomber first flown in 1952 and last produced a decade later. The silo-based Minuteman III ICBM entered service in 1970, and isn’t scheduled to be replaced by a new Ground-Based Strategic Deterrent until 2027.

A new nuclear arms control agreement, proponents argue, would allow both the U.S. and Russia to focus their resources on other more urgent priorities — like fighting a global pandemic. Both countries “have better things to spend their money on than weapons that would cause mutual assured destruction,” says one U.S. defense official, who requested anonymity to speak without authorization.

One major stumbling block toward reaching a broad new agreement remains, however: China, which has a much smaller nuclear arsenal than the U.S. or Russia. U.S. intelligence officials have said Beijing plans to at least double that over the next decade and abandon its “minimum deterrence” strategy as it seeks global parity with the U.S.

So far, Beijing has refused to participate in negotiations with the U.S. and Russia, which Beijing blames on Washington. “I can assure you, if the U.S. says that they are ready to come down to the Chinese level, China would be happy to participate the next day. But actually we know that’s not going to happen,” Fu Cong, the head of the Chinese Foreign Ministry’s arms control department, said last month.

China’s stonewalling has left a split in the Trump Administration between China hardliners, such as Secretary of State Mike Pompeo, and other officials who think that China’s aspirations for great power status will in time convince President Xi Jinping to join the U.S. and Russia onstage.

If the U.S. and Russia do hammer out some kind of new framework agreement without China, there are divisions in the Administration about how, when, where, and by whom such a deal should be announced, multiple officials tell Time.

In one camp are some of Trump’s political advisers, who would like to see the President and Russian President Vladimir Putin meet before Election Day in Austria or another third country to make the announcement. “Making the first step toward a deal no one has ever been able to negotiate would leave Obama and Biden in the dust,” says one Administration official.

It would highlight the president’s dealmaking skills, they argue, as well as demonstrate that his controversial relationship with Putin is paying dividends and provide the pre-election political bounce they hoped for but did not get from Trump’s announcement that Israel and the United Arab Emirates had agreed on a path toward full diplomatic relations. “We need something too big for the media to ignore,” says the official of the Mideast deal, speaking on the condition of anonymity.

Others in the Administration, however, fear that another Putin-Trump meeting would rekindle the controversy over their relationship, and that with Trump trailing Democratic nominee Joe Biden in the polls, any U.S. eagerness for such a meeting would give Russia added leverage in negotiations.

“That’s true,” says a U.S. intelligence official, also speaking on the condition of anonymity. “But if Putin wants to see the President re-elected, which the intelligence clearly indicates he would, a meeting might be good for him, too.”