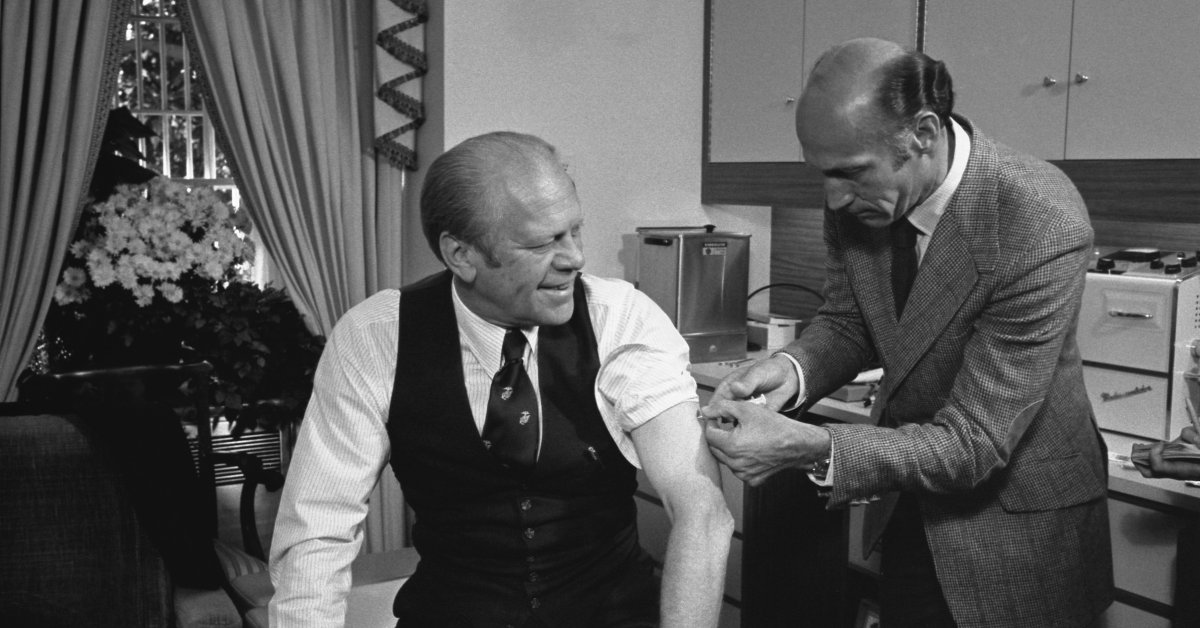 For months, President Donald Trump has repeatedly said that a vaccine for the novel coronavirus may be ready by the end of the year, even as the nation’s top infectious disease specialist says early 2021 is more likely. Now, the New York Times has reported that the Trump Administration intends to speed up the process, with its eyes on a slightly earlier deadline: before Election Day on Nov. 3.

White House officials disputed the Times’ account, and researchers working on the specific vaccine cited as the likely candidate for emergency approval—one that is being developed by Oxford University and pharma giant AstraZeneca—said “it would be premature to speculate on that possibility.” This isn’t the first time Trump or his team has suggested a COVID-19 vaccine could come before the general election—Trump, for example, made a similar claim in the first week of August.

Some pundits, like David Axelrod, an adviser to former President Barack Obama, have accused Trump of being willing to sacrifice safety in the name of politics.

Trump has shot back, suggesting that his political opponents are holding up research progress for the same reason; on Aug. 22, he tweeted that “The deep state, or whoever, over at the FDA is making it very difficult for drug companies to get people in order to test the vaccines and therapeutics. Obviously, they are hoping to delay the answer until after November 3rd.”

This isn’t the first time a fast-tracked attempt to mass inoculate Americans has gotten political. The history suggests that if the White House rushes a vaccine rollout, it can risk losing credibility—not just for itself, but for the science as well.

In February of 1976, more than 200 recruits at Fort Dix military base in New Jersey came down with the flu. While some simply had the 1975-1976 seasonal flu, 13 had a new strain of H1N1, often called swine flu, that the CDC says was “similar” to the strain that caused the 1918-19 flu. One 18-year-old died. The outbreak sparked concerns of a repeat of that infamous pandemic, which scientists now know killed an estimated 675,000 Americans, or of the more recent 1968-69 pandemic, during which 100,000 Americans died and “$3.2 billion was lost in medical bills and working time,” TIME reported.

But the Fort Dix cases involved a new strain of H1N1, so if a vaccine were going to be ready in time for the 1976-1977 flu season, production needed to start as soon as possible. Even though no major outbreak had yet begun, the government decided to put its weight behind the effort.

“We cannot afford to take a chance with the health of our nation,” then-President Gerald Ford said on March 24, 1976, when, per the CDC’s recommendation, he called for a $135 million program (about $615 million in 2020) to produce a vaccine and manufacture more than 200 million doses in time to inoculate all Americans for the winter flu season. The plan “was unprecedented in intended timing and in scope among American immunization efforts,” Richard E. Neustadt and Dr. Harvey V. Fineberg noted in The Swine Flu Affair, their 1978 evaluation of the program, which the incoming Health, Education and Welfare Secretary asked them to undertake.

But not everyone was sure the vaccine program was being launched for purely altruistic reasons. A year of celebrations to mark America’s bicentennial was in full swing. It was also a presidential election year, and while Ford had beaten challenger Ronald Reagan in the first five primaries and the Iowa caucus, it was still a tight race for the Republican nomination. In fact, Neustadt and Fineberg’s report points out that Reagan won the North Carolina primary the day before Ford’s announcement of the vaccine program. During hearings on the program that spring, Washington State’s Democratic U.S. Senator Warren Magnuson joked of vaccine recipients that the Administration “might have ’em vote at the same time,” and, TIME noted, “some legislators and doctors are wondering out loud whether the flu program is merely another symptom of election-year fever.”

Ford Administration officials took the position that—given that the vaccine was safe—the risk of an outbreak outweighed any concerns about politics. Not that it wouldn’t be politically beneficial: “Consider the outcry,” one White House aide was quoted as saying, “if with all that evidence the President had said no.” In April 1976, Congress swiftly passed emergency appropriations to make the vaccine for which Ford had called.

By July 1976, the vaccine was “only partially successful in clinical trials,” TIME reported back then, prompting scientists to reconsider the rollout. Among the roughly 5,000 volunteers injected with the still-being-tested vaccine, researchers found minimal side effects in adults, but high fevers in young people, leading Dr. Albert Sabin, developer of the oral polio vaccine, to backtrack on his initial support of the Ford program, and argue that only the highest-risk people should get the vaccine. Dr. Jonas Salk, who developed the initial polio vaccine, argued it was safe and would reduce the virus’ spread.

By August, when Congress passed a bill officially authorizing the rollout, the effort was two months behind schedule, largely because of Congressional wrangling over whether vaccine-makers would be protected from liability related to the product. This delay would have serious consequences: In retrospect, a 2006 review of the CDC’s handling of the 1976 swine flu vaccine program co-written by David Sencer, the agency’s director back then, found that manufacturers’ demand for indemnification led the public to believe “there’s something wrong with the vaccine,” and so “every coincidental health event that occurred in the wake of the swine flu shot would be scrutinized and attributed to the vaccine.”

Howard Markel, director of the Center for the History of Medicine at the University of Michigan, remembers getting the shot as a high school sophomore: “Everyone went to school gyms or large areas, and I remember vividly my mother making us go, and waiting in line, and saying ‘this is ridiculous.’”

But only a few vaccine-distribution centers were equipped on launch day. A Portland, Ore., health official told TIME, “We didn’t even know we’d received a batch until we read about it in the newspaper.” And the magazine reported that by November, only a quarter of the more than 200 million doses advertised had been manufactured.

Then, 35 mostly elderly people, in various parts of the country, died shortly after getting vaccinated. The government said there was no link between the deaths and the vaccines, but the news still dissuaded people from getting the shot. After the news of the deaths, the number of New Yorkers who showed up for a vaccine dropped from 21,000 to 7,500 a day, and nine states closed their clinics, TIME reported.

“If you immunize very large numbers of elderly people, inevitably some will have a heart attack the next day, so you have to prepare the public for such coincidences,” Fineberg, a co-author of the 1978 study of the public health response, later told the World Health Organization. “That wouldn’t have been a blip on the screen had there been a pandemic but, in the absence of any swine flu disease, these rare events were sufficient to end the program.”

Photographs of Ford (who had ultimately been successful in the primaries) getting vaccinated, like the one seen above, were circulated in an attempt to restore confidence in the vaccine program, but it was too late.

Election Day rolled around, and Ford’s tenure in office ended, for a host of reasons other than the flu-shot rollout. The mass inoculation program ended about a month later—but not before the public’s confidence was once again shaken, this time by reports of shot recipients being at a very slightly higher risk of Guillain-Barré syndrome (GBS).

“The uptick was not directly caused by the flu vaccine,” Markel says, “but it was associated with it, so everyone came to the conclusion that the swine flu shot equaled Guillain-Barré.” (About one additional case occurred per 100,000 people vaccinated, according to the CDC, but most studies that have since evaluated a possible link between other flu vaccines and GBS have found no association.)

Markel also notes that the program’s failure happened to occur at a time when Americans’ trust in government was already in decline, following the Vietnam War, Watergate and the assassinations of the 1960s. The idea that the government would have botched the vaccine and still tried to capitalize on it for political reasons fit right in—whether or not it was true.

That confusion and distrust incubated in that time period lingered well beyond 1976. In a 2009 CDC fact-sheet about a vaccine for that year’s H1N1 virus, for example, two of the questions were about about 1976 and GBS. Today, at a time when unfounded anti-vaccine views are growing (even though vaccines are safe) and polls indicate distrust in the federal government’s management of the response to the COVID-19 pandemic, that enduring doubt can be dangerous.

“Things like the small increased risk of GBS from the 1976 vaccine become…convenient for post-hoc justification of those pre-existing fears,” says Jonathan M. Berman, author of the forthcoming history of the anti-vaxxer movement Anti-vaxxers: How to Challenge a Misinformed Movement. “Later studies showed that there was likely no link, but already wary parents and anti-vaxxers see it as a justification for the fear.”

On the other hand, the 1976 controversy “does provide important lessons,” Berman argues. “When vaccination decisions appear politically motivated, it can undermine trust.”

The fact that even people who are not generally anti-vaccine are worried about the safety of a COVID-19 inoculation means it’s all the more important that a coronavirus vaccine is not rushed, argues Markel. “This is a very touchy issue,” he says, “so this [vaccine] has to be rolled out exactly right.”