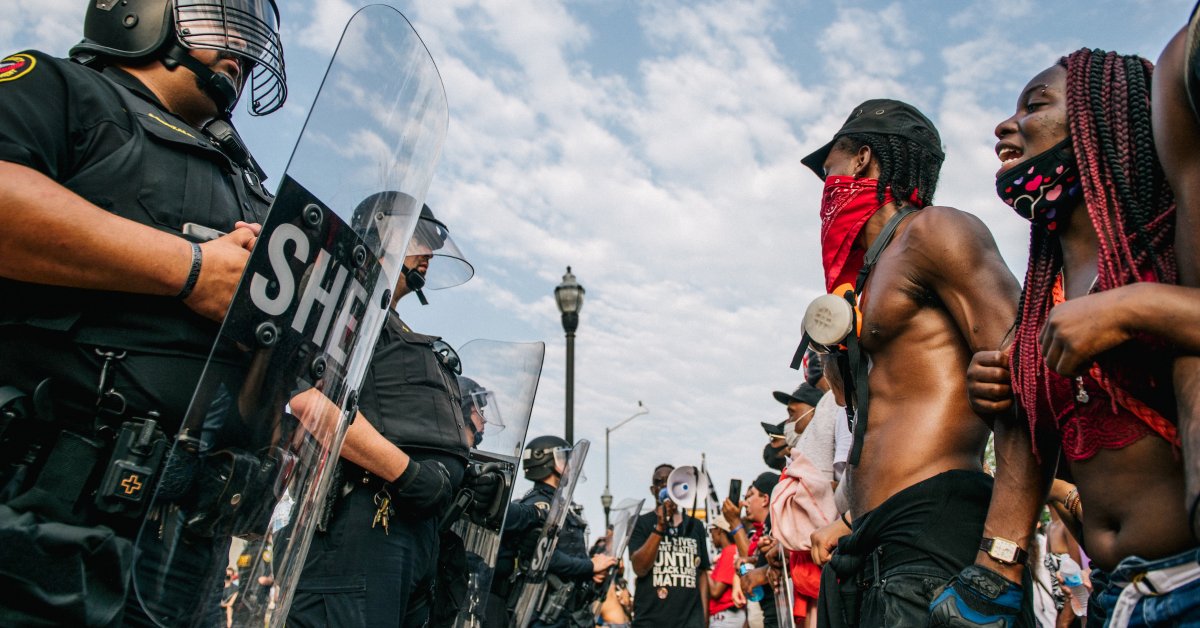 On Sunday, when police in Kenosha, Wis., shot Jacob Blake several times in the back, the incident quickly became part of the long list of violent moments that have helped shape this year. Blake, a 29-year-old Black man, appeared about to enter a gray SUV in which his three children were sitting. Kenosha police have released few details about the event, but on Tuesday, the family’s attorney, Benjamin Crump, tweeted that Blake was “currently paralyzed from the waist down.”

As has been the case with a number of police shootings in recent months, a video of the event quickly spread online and prompted community members to take to the streets in Kenosha. Some initially peaceful demonstrations turned violent as law enforcement clashed with protesters. “It has just been getting more and more tense with the police. They’ve been slightly more aggressive with us with each demonstration,” says Diamond Hartwell, 25, a Kenosha native and human rights activist.

Early on Wednesday, two people were killed during the ongoing unrest, Police said, in an episode that took place near a gas station where protesters and a group of armed men were arguing.

But the events of 2020 aren’t the only story of which Blake’s shooting is a part. What happened to Jacob Blake is also part of other long, troubling histories—including those of race in Wisconsin and of police-community tensions in Kenosha specifically. And what protesters are taking to the streets to fight for, including accountability measures like body cameras and increased transparency from the police department, had been on the minds of many community members long before this year.

“Midwesterners don’t understand their history of racism, and so these things seem surprising. They seem to come out of nowhere or be new when they’re really a reflection of who we’ve always been,” says Christy Clark-Pujara, associate professor of history at the University of Wisconsin–Madison’s Department of Afro-American Studies. “It’s not terribly surprising to me what happened in Kenosha.”

Wisconsin’s history with race is complicated: Clark-Pujara describes the state as “racially progressive and oppressive at the same time.” Wisconsin was a place of refuge for many people who escaped slavery, who could find help getting to Canada from there, but the state also scrapped an early draft of its constitution that would have called for a referendum on Black male suffrage; the version of the state constitution that passed in 1848 ended up allowing only white men to vote. “If you were trying to flee bondage and get through Wisconsin, you could find help. If you were trying to settle and live your life as a free Black person in Wisconsin, you were pushed to the margins,” says Clark-Pujara.

The number of people affected by that dynamic grew throughout the 19th and 20th centuries, especially as post-World War II job opportunities drew new Black residents to the state. Even so, as of 2019, the state’s population is overwhelmingly white.

A lack of understanding of this history, and of the ways in which white supremacy can be deeply rooted even in a region with a seemingly positive record on equality, has made the Midwest “a place of polite, passive-aggressive racism,” Clark-Pujara argues—and, she says, that dynamic has contributed to the fact that “some of the worst disparities between white and Black people are in the Midwest.”

One report found that Midwestern states, including Wisconsin, made up 10 out of 11 of the states “with the largest ratio between black and white unemployment in 2017.” And five out of six of the country’s metropolitan regions where Black residents experience concentrated poverty at rates over 40%—a measure of whether a large number of people in a certain area are poor—are in the Midwest; Milwaukee is among them. Kenosha, a city of 100,000 where Black residents represent 11.5% of the community, is halfway between Milwaukee and Chicago, two of the most segregated cities in the U.S.

And in some cases, the more recent versions of the forces that excluded Black people from the Wisconsin constitution were not “polite” or “passive-aggressive” at all.

“You have this white supremacist contingent here in Kenosha, and for some reason, they feel very, very comfortable,” Dayvin Hallmon, a former Kenosha County Board Supervisor, tells TIME. For example, In 2016, a student at Kenosha’s Westosha Central High School dressed up as a Ku Klux Klan member for a class presentation. And last year, The Southern Poverty Law Center tracked 15 hate groups, including Neo-Nazi and white-nationalist organizations, with a presence in Wisconsin.

To Hallmon, these underlying currents of racism seemed to manifest, as they so often have in the U.S., in the relationship between the city’s Black population and its police force; he says he recalls several incidents from his time there during which he felt that police were not looking out for Black people’s safety. (The Kenosha Police Department did not respond to requests for comment for this story.)

And tensions between Kenosha’s residents and its police have not been limited to the Black community. Notably, in 2004, 21-year-old Michael Bell Jr., who was white, was shot by police in front of his family, like Blake was. After a brief internal investigation of the incident absolved the officers, some in the community came to believe the police were trying to cover something up. Though the police department long stood by its officers in the case, Bell’s family later won a lawsuit against the city and helped push for a 2014 provision that changed the way deaths involving police are investigated in the state. “That was one of the biggest things in recent times that majorly separated the public and the police department,” says Isaac Wallner, Kenosha resident and founder of the Human First Project, a grassroots advocacy group.

Incidents like these led to “a sense that something needed to be done,” Hallmon says, “but also a sense of ‘there’s nothing we can do, no one’s actually going to listen.’”

The hopelessness felt by the residents of his district led Hallmon to bring up a package of reform for the police department in 2016, which included body-worn cameras for police officers. The idea did not turn into a reality: In 2017, the city unanimously passed a resolution recommending the use of body cameras, but the measure still hasn’t been implemented even today, with city officials citing cost as an issue. On Monday, Kenosha Mayor John Antaramian confirmed that body cameras won’t be in the budget until 2022.

Two years after introducing those reform measures, Hallmon decided he’d had enough of Kenosha. “I felt like I had to do something to get myself back as a human being, because trying to stop everything that you see and the multiplicity of ways that I did it, it broke me and destroyed me as a person,” says Hallmon. “It was either that or suicide.”

It is perhaps unsurprising, then, that as protests swept the nation and the world this year, Kenosha saw its histories of racial and community strain brought back to the forefront. On June 27, for example, Black Lives Matter counterprotesters interrupted a “Back the Badge” rally in support of law enforcement at the city’s Civic Center Park. Activist Diamond Hartwell was among the counterprotesters, working to record and deescalate situations. “[The police] were not on our side at all,” she says. “They were not protecting us.”

And so when Jacob Blake was shot, it was in a city that was already on edge—where activists are still at work and hoping that the incident drives real change.

“The greatest emotional toll is on Jacob and his family. He took the bullets, not us,” says Wallner. “It’s up to us. We the people have the power to make sure that people answer for his shooting and to make sure that nobody else has to go through that again.”