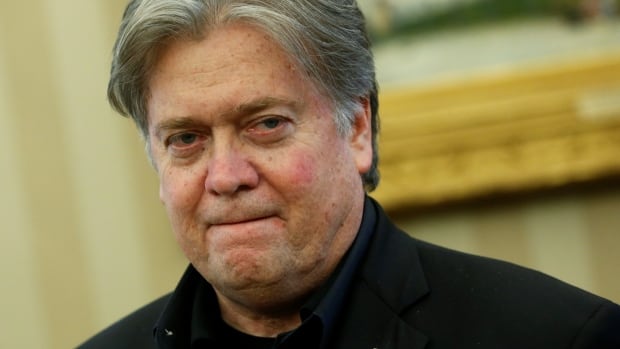 Former White House adviser Steve Bannon was arrested Thursday on charges that he and three others ripped off donors to an online fundraising scheme “We Build The Wall.”

The charges were contained in an indictment unsealed in Manhattan federal court.

Federal prosecutors alleged that Bannon and three others “orchestrated a scheme to defraud hundreds of thousands of donors” in connection with an online crowdfunding campaign that raised more than $25 million US to build a wall along the southern border of the United States.

A phone at the office of Bannon’s lawyer went unanswered Thursday morning. A spokesperson for Bannon did not immediately respond to a request for comment.

Bannon served as adviser to Donald Trump’s administration until August 2017, which was almost exactly a year from his assuming the role as Trump campaign chair.

He had risen to prominence at Breitbart.com, helping direct coverage at the conservative outlet to focus on criticizing moderate Republicans, as well as stories on crimes committed by those in the U.S. illegally.

He has been credited with helping turn around a campaign that was struggling in the polls against Hillary Clinton and employing a no-holds barred approach. After Trump was damaged by the revelation of an Access Hollywood tape in which he bragged about sexually assaulting women, Bannon was said to have arranged a session two days later on the eve of a presidential debate in which four women reprised allegations against former president Bill Clinton of sexual assault and sexual misconduct

Bannon, along with former senator Jeff Sessions and former Sessions aide Stephen Miller, have been described as helping formulate what would become a hardline immigration stance from the Trump administration. All three joined the administration, but only Miller remains, as an adviser.

For a time, Trump continued to praise Bannon after he left the White House, but soon grew angered by the adviser’s willingness to talk to reporters about the first six months of the administration.

He is the second former Trump campaign chair to be charged criminally. Bannon as campaign chair succeeded Paul Manafort, who is currently serving a sentence for an assortment of bank fraud and witness tampering charges in home confinement due to COVID-19.

The final report from the Republican-led Senate intelligence panel released this week laid out a series of extensive contacts between Manafort and at least two men close to the Kremlin. Manafort has been accused of sharing polling data with one of the men, and lying to both the FBI and investigators from special counsel Robert Mueller’s team.