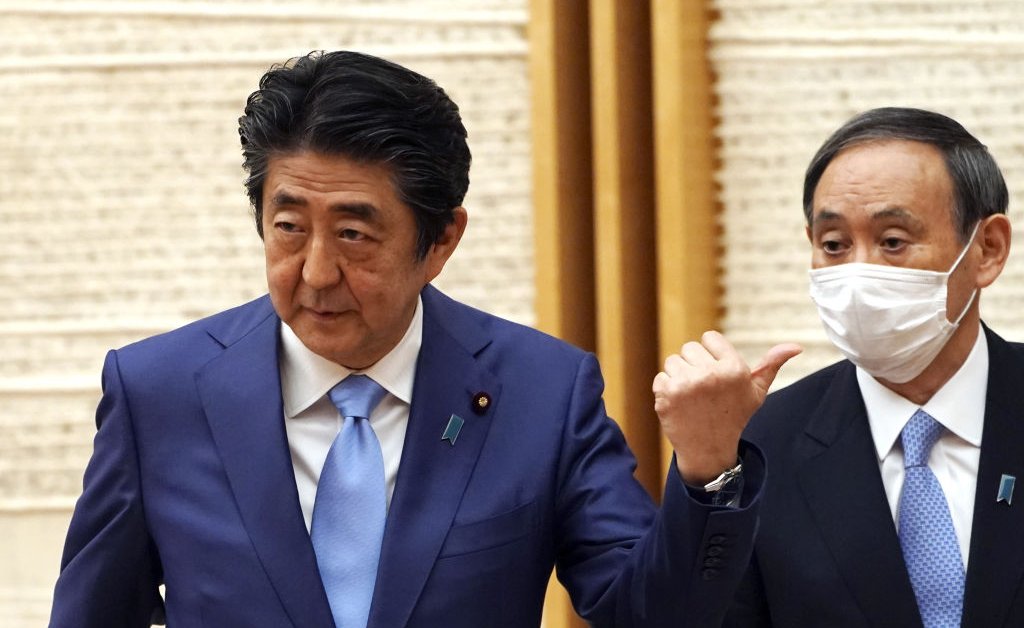 It’s not the exit that Shinzo Abe had planned. Japan’s longest-serving prime minister steps down next week owing to a recurrence of colitis, a chronic intestinal disease. He leaves a dire approval rating, the nation’s pacifist constitution unreformed and its economy stricken from the coronavirus pandemic, which also forced the postponement — perhaps cancelation — of the 2020 Tokyo Olympics.

Those Games had been pegged as Abe’s glorious swansong — Liberal Democratic Party (LDP) rules meant he only had a year left in charge. He instead leaves a troubled inheritance. Abe’s successor must deal with the coronavirus rendering the “Abenomics” economic rejuvenation policy moribund, an increasingly bellicose China and North Korea, a capricious partner in the White House and a ticking demographic time bomb. There won’t be much of a honeymoon.

The smart money is on Abe’s top aide taking over the reins. Yoshihide Suga served as Abe’s Chief Cabinet Secretary—the equivalent of a White House chief-of-staff, communications director and vice-president rolled into one—for almost eight years. He is expected to be elected by the LDP on Sept. 14 after wooing competing factions as the stable, continuity candidate. (Defense Minister Shigeru Ishiba and ex-Foreign Minister Fumio Kishida are also running but outside bets.) The LDP, with its coalition partner, controls a majority in the legislature, meaning whomever the party picks is all but assured to be prime minister.

Who is Yoshihide Suga?

Suga, 71, the son of a strawberry farmer in the agrarian hamlet of Akinomiya in frozen northern Akita prefecture, lacks the political pedigree of Abe, who’s the grandson of a prime minister and son of a former foreign minister. But Suga has built a reputation as a tenacious, details-orientated workaholic, who still does 100 sit-ups every day and doesn’t touch alcohol. A childhood friend told the Wall Street Journal that Suga was a talented sumo wrestler in his youth.

An unabashed curmudgeon, especially with the press, he is more technocrat than visionary. However, he took a leading role pushing through the Trans-Pacific Partnership (TPP) free trade pact after the U.S. withdrew under Trump. Most of all, Suga has the reputation as a wily, skillful political operator behind many of Abe’s policy successes. “Suga is a major reason why all Abe stayed in power so long,” says Jeffrey Kingston, professor of Japanese studies at Temple University in Tokyo.

If picked to be prime minister, he will have to make tough decisions straight away. Japan has general elections due by October 2021, so Suga must choose whether to serve as caretaker until then—or exploit current disorder in the opposition ranks and call the ballot early to cement his mandate.

“The next administration should not be an interim government,” Suga told Japan’s Kyodo news agency on Saturday.

Keeping the economy ticking in the throes of the pandemic is top priority for every world leader, though Japan’s shrinking, aging population renders Suga’s challenge unusually acute. Abe had already approved $2.2 trillion in stimulus packages and more is in the pipeline. But a 100,000 yen ($940) handout to all citizens hasn’t boosted consumption as hoped.

Suga was a driving force behind a “Go to Travel” campaign to subsidize up to half the costs of domestic tourism after international arrivals all but ceased. However, that initiative was rolled back and branded a “failure” by critics amid a COVID-19 surge in July and August. Many more economic countermeasures are currently under discussion, such as temporary income guarantees and expanding jobs subsidies.

“The problem is that he represents continuity where probably there’s a need for fresh thinking,” says Kingston. “More of the same doesn’t offer much promise.”

During Abe’s valedictory speech, one of his proudest accomplishments was work culture reform to curb Karoshi, or death by overwork, where workers spend endless hours in the office and feel obliged to go drinking with colleagues after hours. Whether the self-styled workhorse Suga will continue that campaign is unclear.

Analysts say Suga will likely continue boosting opportunities for women. Under Abe, female labor-force participation increased from 63% to 71%, higher than in the U.S., although most are still in dead-end jobs with few career prospects.

It’s doubtful that Suga will apply the same vigor to Abe’s ideological ­quests, such as installing patriotic education and reforming Japan’s pacifist constitution to give its military more room to operate. “These don’t seem to be at the top of his list of priorities,” says Sheila Smith, an East Asia expert at the Council on Foreign Relations.

Abe was a canny international operator, visiting 80 countries to build consensus on various issues and boosting Japan’s geopolitical clout. However, the coronavirus means Suga will struggle to adopt the same brand of retail diplomacy.

Still, Suga’s success keeping TPP alive and negotiating a trade deal with the E.U. means he’s no geopolitical parvenu. Before the pandemic struck, Chinese President Xi Jinping was due to visit Tokyo in April, and Suga is likely to try rekindling that visit in the hopes of announcing himself to the world.

Abe succeeded in building trade and investment ties with China, though relations between the historic foes remain frosty due to historic grievances. China set a record this year with 111 days straight incursions into Japanese waters around the disputed Senkaku Islands, known as the Diaoyus in China. (They only stopped because of an approaching typhoon). Japanese fishing trawlers in the area are routinely harassed by the Chinese Coastguard.

Kristi Govella, assistant professor of Asian studies at the University of Hawaii at Mānoa, says that problem for Suga is that tensions between Japan and China are structural in nature. “Suga’s basically caught in a balancing act between Japan maintaining a strong economic relationship, but also recognizing that China increasingly imposes a looming security threat,” she says.

North Korea’s rapidly advancing nuclear and missile capability is another top concern for Japanese citizens, who restarted emergency drills amid threats of annihilation from Kim Jong Un. Abe was a key Trump ally toward building multilateral support for unprecedented sanctions on North Korea at the U.N. and Suga will not want that to slip. “On the defense side, Suga is by no means a dove,” says Smith.

Buddies in the White House

Abe made a big show of charming Trump. He was the first foreign leader to congratulate the then President-elect in 2016, flying to New York just days after his victory. And the two leaders bonded over several rounds of golf, with Abe even gifting Trump a gold-plated driver.

The benefits of that fawning are unclear. Abe avoided some of Trump’s worst bombast, but the mercurial U.S. President still pulled out of TTP, slapped Japan with aluminum and steel tariffs and strong-armed Abe into a one-sided trade deal. Now Trump wants to quadruple the $2 billion Japan pays for hosting U.S. troops in the country.

“It’s really hard to see that Japan has gotten a whole lot of mileage out of Abe’s good relationship with Trump,” says Kingston, of Temple University. Smith disagrees: “Abe doesn’t get enough credit for navigating around this more unpredictable United States.”

The prospect of a Biden administration may offer Suga a return to less adversarial bilateral relationship. Like the rest of the world, he will be eagerly watching the U.S. come Nov. 4.