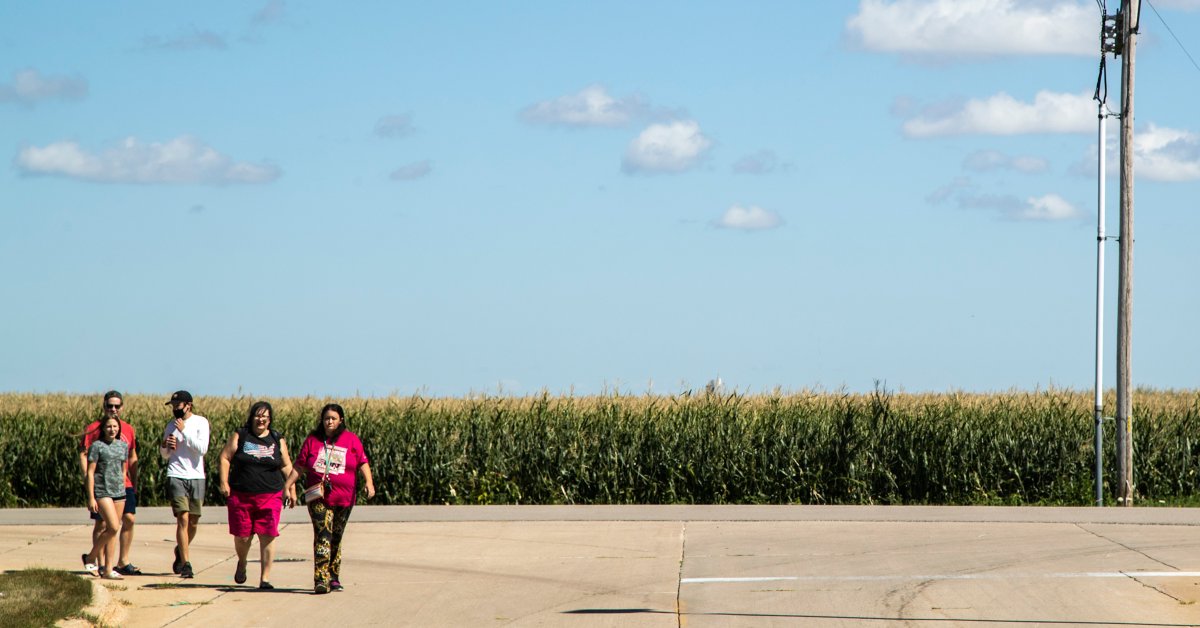 This article is part of the The D.C. Brief, TIME’s politics newsletter. Sign up here to get stories like this sent to your inbox every weekday.

President Donald Trump has worked hard in recent weeks to keep voters’ attention on American cities, which he describes as violent, chaotic places. That strategy conveniently keeps Americans from looking too closely at what’s going on in more rural locales.

For the past three years, Iowans have faced a string of devastating setbacks, from trade tensions with China that cut farmers off from a key market to a slew of climate-related disasters that have flooded cities, destroyed crops, and forced farmers into bankruptcy. And while the Trump Administration has responded with federal aid, helping farmers make ends meet in the short term, it has done little to address the issues at their core.

“I think it’s fair to say that for all of us in the state, regardless of your size, or what you’re growing, these are really challenging times,” says Matt Russell, an Iowa farmer who advocates for action on climate change and has hosted Democratic presidential candidates at his farm.

In Iowa and elsewhere, many rural Americans have so far been forgiving of Trump for the way his policies have affected their livelihood, but it’s not clear to what degree this lenience will last. Trump won the state handily in 2016, by 10 percentage points, and was widely expected to do so again this year. But recent polls show a neck-and-neck race between him and Democratic nominee Joe Biden. Many local political observers wonder whether the President may finally be feeling the effects of a deteriorating situation in rural America.

The most visible, obvious challenge to rural Iowa is the spate of extreme weather events— attributed in large part to climate change—that have rocked the state in recent years. Last year, I visited after torrential flooding left an estimated 100,000 acres of farmland underwater. This year’s devastation has arguably been worse. In August, a giant wind storm known as a “derecho” destroyed some 14 million acres of farmland, many just before harvest, as well as thousands of structures. The damage will total billions of dollars. This is in a sense the new normal for the state where precipitation has spiked notably in the last decade, and dramatic flooding has occurred year after year as global temperatures have risen.

Many farmers remain hesitant to talk about the human role in global warming, but there’s also a growing conversation about how farmers can be a part of the climate solution. Nonetheless, in all quarters, there’s little debate that something needs to be done in response to protect against extreme weather. And while Trump has earned praise from state Republican officials, many have questioned his decision not to approve the full package of aid requested by local officials. Families “lost homes and businesses and saw their communities turned upside-down by the hurricane-force winds,” said Iowa Rep. Abby Finkenauer, a Democrat, in a statement. Trump’s partial approval of emergency funds, she added, “falls short.”

Trade tensions have also hit farmers hard. Much of Iowa’s corn and soybean harvest is typically exported to China. When Trump launched his trade war, China pulled back its purchases, leaving American farmers’ crops to rot. The Administration offered lifeline payments to help farmers make ends meet, and in January signed a deal with China in which the country agreed to buy billions in U.S. agricultural products as part of a preliminary trade deal. But the purchases have yet to materialize in full, and farmers have been left in the lurch.

And then there’s the Renewable Fuel Standard (RFS), which requires oil refiners to blend oil with ethanol when making gas to be bought at the pump. The policy is intended in part as a lifeline for Iowa’s corn farmers, who sell much of their harvest to be turned into ethanol. In response to pressure from allies in the oil and gas industry, the Trump Administration has weakened enforcement of the rule and granted exemptions to refiners so they don’t have to buy ethanol made from the farmer’s corn.

This may sound like a wonky piece of regulation, but to many farmers, it’s key to financial viability. “Iowa may very well hang in the balance,” the Iowa Corn Growers Association and other trade groups wrote in a letter to Trump late last month, calling for him to change his tune on ethanol.

Iowa is not alone. Minnesota, Ohio and Wisconsin—all swing states with greater significance than Iowa in determining the outcome of the Presidential election—rank in the top ten corn-growing states, and their rural communities similarly benefit from the RFS.

Biden has sought to leverage rural voters’ sense that Trump has left them behind. His rural plan hits the key complaints from voters I’ve encountered in rural Iowa, promising a new trade agenda, support for ethanol and a push to address climate change. “We don’t have a platform from the Trump Administration because they’re just going to try to do what they’ve been doing,” said Darin Von Ruden, the president of the Wisconsin Farmers Union at a Biden campaign virtual roundtable on Aug. 28. “That really hasn’t been good for rural America, when you look at the number of farmers that have gone out of business.”

Despite all this, it’s safe to assume that many farmers will stick with Trump regardless, some 80% said they approved of the President in a June poll. For some, other regulatory issues, like an Obama-era policy that regulated many streams in rural communities, are enough to keep them on Team GOP. For others, it’s as simple as the media they consume: Fox News and conservative radio often portray the President as doing no wrong. But, in a close race, which will no doubt be decided in a handful of districts in a handful of states, even a small number of defections, or even just voters who choose to sit this one out, can make a big difference.

“Rural America has supported the President and continues to overall,” Ray Gaesser, a corn and soybean farmer in Corning, Iowa, told me before the 2018 midterm elections. “As you have more and more financial pressure, that might change.” Two years later, it’s clear many farmers’ finances have taken a turn for the worse.