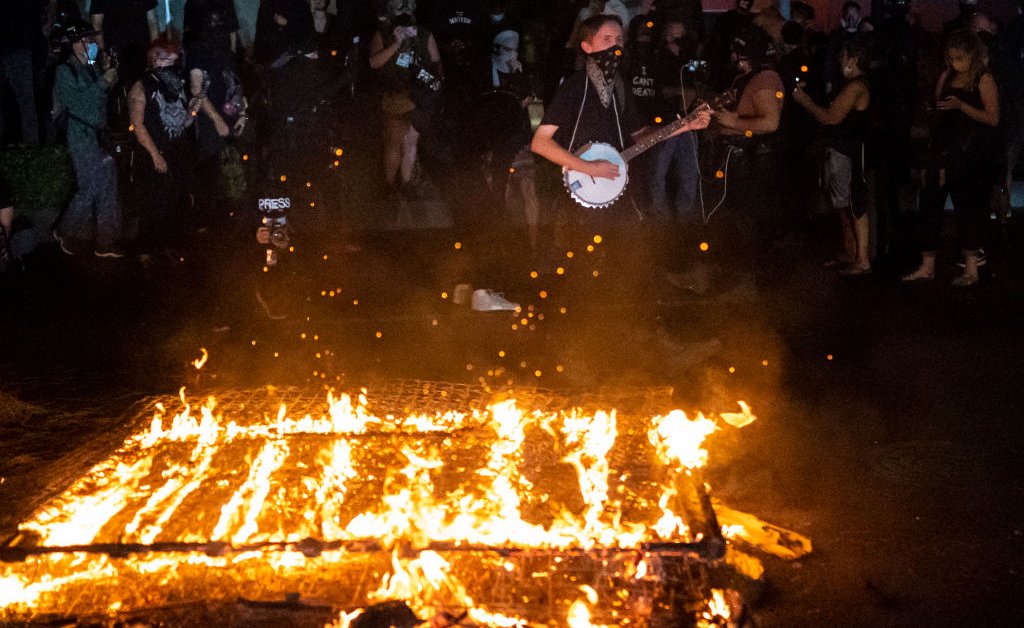 (PORTLAND, Ore.) — A fire started outside a police precinct on Portland’s north side resulted in about 15 arrests during protests Sunday night into Monday morning, police said.

Officials warned demonstrators against entering the precinct property, saying they would be trespassing and subject to arrest.

Shortly after arriving, the crowd began chanting, among other things, “burn it down,” police said in a statement. Some in the group lit a mattress on fire just after 10 p.m.

“Because it was not an immediate threat to life safety or structures, officers remained far back and did not engage,” police said. “Another mattress was added to the fire, as was some yard debris. The larger fire began to send lit embers into the air.”

Since Multnomah County has a burn ban in effect due to extremely dry conditions, firefighters came in to extinguish the blaze.

Demonstrators moved to another side of the building and blocked some streets until dispersed by police. Most protesters were gone by about 1 a.m. Monday.

“Officers discovered one arrestee was in possession of a glass jar filled with flammable liquid,” police said. “Another had a bottle containing an accelerant and a slugging weapon known as a slung shot. Still another had an electronic control weapon (“stun gun”) and a baton. Two arrestees had ballistic vests, including one, marked with the word “press,” with rifle plates.”

Most of those arrested were from Portland. Others were from San Francisco; Sacramento, California; Mesa, Arizona; and two from Vancouver, Washington.

Charges included interfering with an officer, resisting arrest, reckless burning and possession of a destructive device.

On Saturday, hundreds of people gathered for rallies and marches.

Molotov cocktails thrown in the street during a march sparked a large fire and prompted police to declare a riot. Police confirmed that tear gas was deployed to defend themselves and said 59 people were arrested, ranging in age from 15 to 50.

Demonstrations in Portland started in late May after the police killing of George Floyd in Minneapolis.