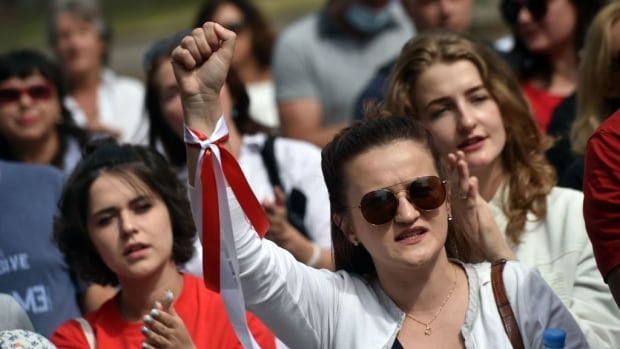 Alexander Lukashenko, the leader of Belarus, on Tuesday awarded medals “for impeccable service” to law enforcement officials who have helped him crack down on protesters who have been demanding he step down for the last 10 days.

In an effort to clamp down on strike action that has hit some of the country’s most important factories, the government also issued a missive to managers of state-run plants telling them to ensure workers fulfil their duties or be disciplined.

Lukashenko, in power for the last 26 years, is under pressure, with no sign to an end of protests and strikes against what protesters say was a rigged Aug. 9 presidential election that he says he won.

At least two protesters were killed and thousands detained in the post-election crackdown. The opposition says opposition politician Svetlana Tikhanovskaya was the rightful winner and wants new elections.

The European Union is gearing up to impose new sanctions on Minsk over its crackdown. German Chancellor Angela Merkel told Russian President Vladimir Putin on Tuesday that Berlin wanted the Belarusian government to refrain from violence, release political prisoners and start talks with the opposition.

Putin, the Kremlin said, told Merkel that any external attempt to intervene in the domestic affairs of Belarus would be unacceptable.

Russia, a traditional ally of Minsk, is watching closely as Belarus hosts pipelines that carry Russian energy exports to the West and is viewed by Moscow as a buffer zone against NATO.

Hundreds of protesters chanting “shame” gathered at a theatre in Minsk on Tuesday in solidarity with its director, who was fired for speaking out in support of the opposition.

They later converged on a prison where the husband of exiled opposition leader Tikhanovskaya has been detained since the end of May. He was planning to run against Lukashenko in the election. His wife took his place instead.

Lukashenko is battling to contain the biggest challenge yet to his grip on power, as protests over his handling of the coronavirus pandemic, the election and other grievances spiral into a revolt among swaths of society.

He was heckled by factory workers on Monday and has faced opposition from people normally seen as loyal. The Belarusian ambassador to Slovakia and four other diplomats have resigned in support of the demonstrators.

A co-ordination council pushed by Tikhanovskaya to facilitate a transition of power was due to meet in Minsk later on Tuesday for the first time.

Many detained protesters have complained of punishment beatings, cramped conditions and starvation rations.