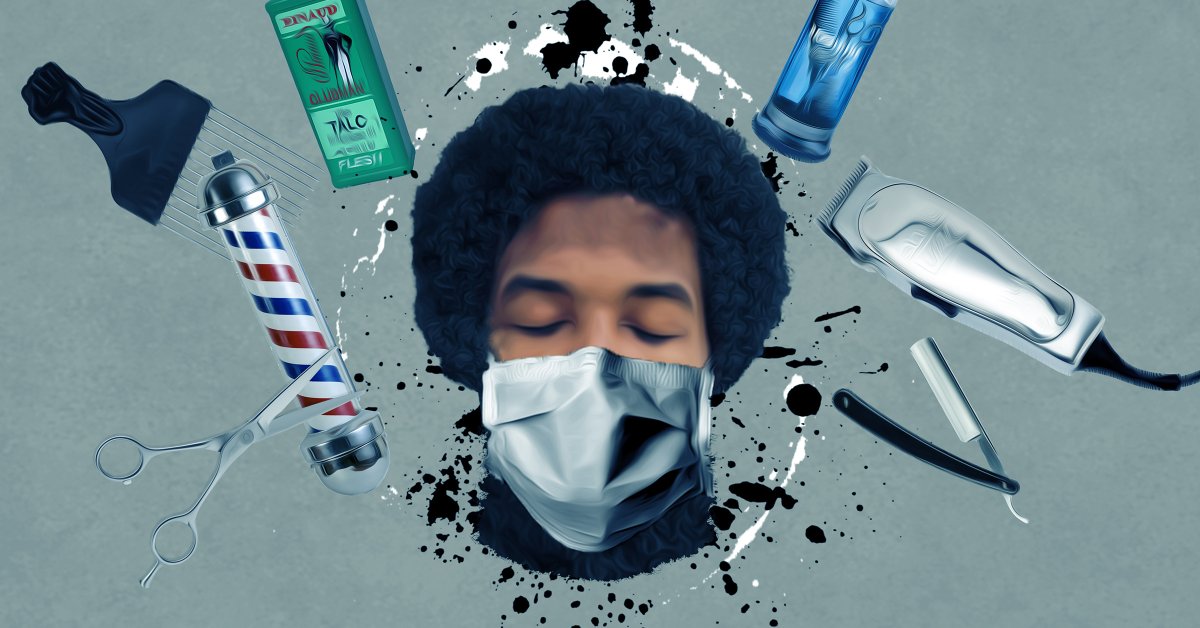 Halfway through my first self-administered haircut during quarantine, I realized it would be, charitably described, uneven. I don’t possess the skills, patience or proper tools to give myself a decent at-home haircut—I used my neglected beard trimmer, ill-equipped to handle the month’s worth of growth on my head. I have never owned a proper set of clippers, opting to outsource my haircare to a professional. I have never not had access to a barbershop. Until now.

And so it’s not that I didn’t understand the protesters who grew weary of lockdown orders, the ones who have been ridiculed for their unwillingness to endure some inconvenience for the greater good of public health. One man stood with a sign that simply read “We demand haircuts.”

More than the haircut, though, I want to go to my Black barbershop, where Black barbers take their time with my Black hair while I’m surrounded by other Black people. This is perhaps the big difference between me and those protesters: they demanded a service, I want a place to feel cared for.

The Black barbershop has its own special lore. Many 19th century Black barbers refused service to Black men out of fear that, not wanting to be shaved by the same razor that touched a black man’s face, white men would take their business elsewhere. It was not until “race relations deteriorated at the end of the 19th century,” writes Douglas Walter Bristol Jr. in Knights of the Razor: Black Barbers in Slavery and Freedom, that these barbers “reinvented their traditions to serve the growing Black population emerging in the cities, establishing major corporations and creating the modern-day Black barbershop.” This is the place we speak of romantically, the one depicted in films like Coming to America and Barbershop. Black barbershops operate as “public spaces where black men can congregate, socialize, and air opinions without repercussions,” writes Quincy T. Mills in his Cutting Along the Color Line: Black Barbers and Barber Shops in America.

The barber cares and shows it, applying sharp tools directly to the skin, putting you in relative danger, then seeing you through to the end, unscathed. The barbershop is where I learned to make peace with a bit of pain. For some, though, it is a site of immense pain, a largely homosocial space consisting of Black men who revel in the lack of consequences for their speech, which is far too often steeped in misogynist and queerphobic attitudes. Indeed, queer Black folks have had to establish their own space to avoid this toxicity.

I chose my current barbershop in part because, aside from the dedication to push-ups, it is mostly free of that disturbing brand of machismo. The day before nonessential businesses in New York City were ordered closed, I walked past it. I wanted a haircut so badly, but it was clear this pandemic was nothing to be played with, and I took seriously the idea of social distancing. I wanted a haircut even more as we learned COVID-19 was disproportionately affecting Black people. I wanted my barber to take my head in his hands and make it better.

It’s probably no coincidence that I gave myself that first haircut within a day of learning that my great-aunt had died from COVID-19. Nearly a third of Black adults in the U.S. know someone who has died from COVID complications. The Trump Administration’s goal, according to reporting in the Washington Post, is to “convince Americans that they can live with the virus,” which is to say they are conscripting the American public into accepting more Black death in the service of the economy. “It is what it is,” the President said last month when asked about the death toll. We are grist for the mill.

Without the barbershop, there are few places to seek refuge from the constant reminders of the disposability of Black life, few places that feel like a testament to the adage “Black is beautiful.”

I’ve thought, too, about how closed barbershops, during a crucial election year, would affect Black engagement. They are, for better or worse, one of the first places campaigns go to get the pulse of everyday Black American concerns. The same is true for media outlets, a practice with roots in Black newspapers that flourished during the 1940s. “Reporters from the Pittsburgh Courier and Chicago Defender regularly printed debates and conversations they participated in or overheard at a barber shop in their respective newspapers,” writes Mills, “reflecting the democratic ideals of World War II and the realities of Jim Crow America.”

Of course now the largest demonstration against police violence in U.S. history has erupted in response to the killings of George Floyd, Breonna Taylor, Tony McDade and so many others, and the shooting of Jacob Blake. In the middle of a pandemic, where proximity increases threat, protesters risk their lives to show one another they care. They don’t so much need the barbershop.

Still, as I continue to hear about Black people dying from both police brutality and COVID-19, I want more and more to find relief, however insufficient, in a fresh haircut. Barbershops have reopened in New York, but it remains, in my estimation, too risky to go. For the sake of public safety, I’ll live with my patchy home haircuts, longing for that warm feeling I don’t know how to replicate.