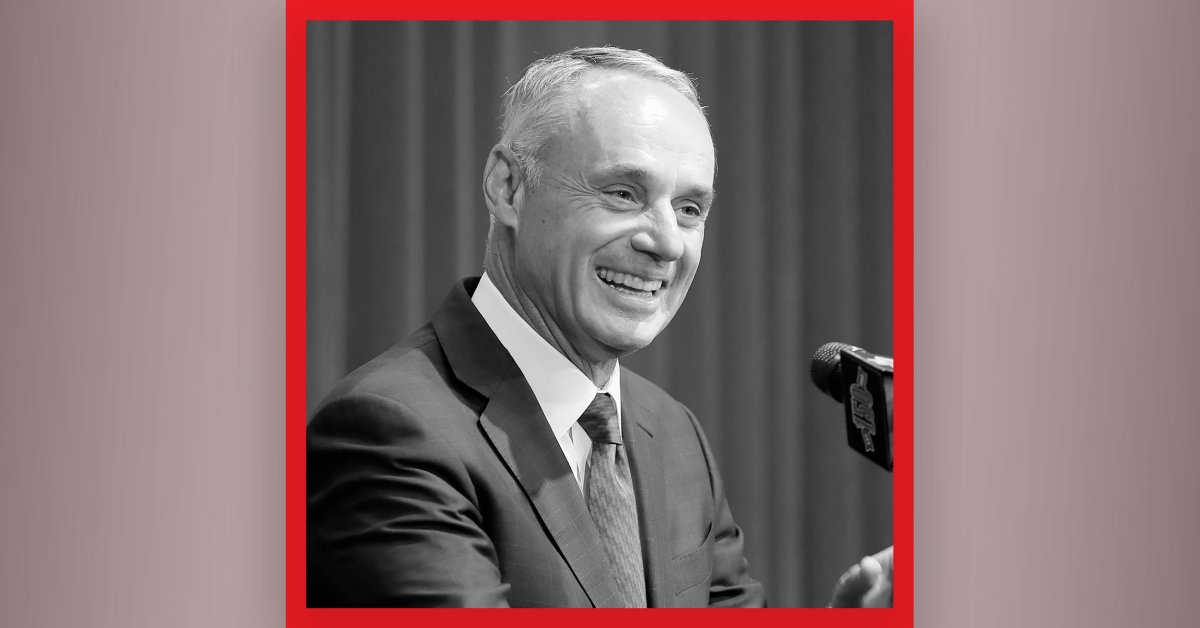 Major League Baseball commissioner Rob Manfred said he wished he’s made some different decisions during baseball’s tumultuous 2020, a year in which Manfred handed down punishment in a historic sign-stealing scandal involving the Houston Astros, delayed the start of the season because of the COVID-19 pandemic, was involved in a public labor dispute with his players as Americans suffered through harsh economic hardship, and had to manage through COVID-19 outbreaks among the Miami Marlins and St. Louis Cardinals once the season finally started in July. He declined to offer specific mistakes, except for one: the spring labor dispute.

“I’ll tell you one thing absolutely for sure, I blame myself for allowing the labor situation to get as public as it did,” Manfred said during a TIME 100 Talks discussion on Aug. 20. “If you look back, one of the things that we changed when I came to baseball was we didn’t bargain in public. Most of the four contracts I did, people didn’t even know we were negotiating. I think it was an important part of the success that we enjoyed. And I got away from that. I allowed the institution to get away from that. And it was a mistake.”

Many fans think baseball’s call to start its regular season outside the kind of protective bubble environment launched by the NBA and NHL, which has had no positive tests, was a mistake. “It’s hard to regret something that was not feasible from our perspective,” says Manfred. Playing at least some portion of baseball’s 16-team postseason in a confined bubble environment, according to Manfred, is a distinct possibility. “It’s a lot more workable in the postseason for us, given it would be fewer teams.” Manfred wouldn’t put a percentage odds on a playoff bubble, but tells TIME that “we’re pretty far along” in the planning process. He says he’s been in regular contact with NBA commissioner Adam Silver and NHL commissioner Gary Bettman throughout the process. “A bubble is a very difficult thing,” says Manfred. “Hats off to Adam and Gary for being able to pull it off. But we’re deep in the process.”

Manfred offered his reasons on why a regular season bubble wouldn’t work. “First of all, it’s facilities. We play 15 games a day,” he says. “Our games are over three hours in length, on average. It takes in a good time an hour in between games to get the field ready for another game. In a bubble format, you would have had even longer delays because of the need to deep clean dugouts, bullpens, and clubhouses. So when you add all that up, you would need at least six major league quality facilities in order to play those 15 games on a daily basis. They are not very many places where that would work. You could subdivide into two groups, but remember, we have 15 teams in each league, one team would have had to been realigned for the 2020 season and a new schedule done. So facilities were a serious problem.”

“Number two was numbers,” Manfred says. “Unlike the sports that are operating in the bubble, we had a huge numbers issue. We’re playing with 28-man rosters, we have a taxi-squad of five to seven people, you’ve got coaching staffs, another five to seven, training staffs, medical staffs, umpires, the people you need to run six facilities from a baseball operations perspective, and then broadcast operations people for all six facilities. It was just a massive number, and there was a real question as to whether we could even find hotel space that was adequate to cover that large group.

“And then the last piece was the calendar. Both the NHL and the NBA were in the middle of their season, close to the end of their season. They had to complete the season, and then move into the playoffs, where the number of teams goes way down. We hadn’t played a game. We had to play a credible regular season, and it was going to be months in a bubble, and it raises all sorts of issues, not the least of which are what are you going to tell people in the bubble about their families during that several month period that they’re locked down. I think that the latter issue, the family issue, was one of the principal reasons that the MLBPA came to us and told us that they didn’t think the bubble was something the players were prepared to undertake.”

Both the Miami Marlins and St. Louis Cardinals suffered major outbreaks: after MLB investigated each, what evidence emerged that made Manfred comfortable that the season could go on, and that these sorts of major spreads within teams wouldn’t just keep happening? “I think the principal issue with respect to both outbreaks was we were able to identify how the outbreak began, and trace it to a failure to adhere to the protocols that we had in place,” says Manfred. “If we felt that the protocols had been strictly observed, and we’re still having outbreaks, that would have been a different case for us.” So what happened in those cases? Manfred wouldn’t share details, and says he doesn’t plan to release the findings publicly. “I will say that the violations involved the things that you would have thought,” says Manfred. “Inadequate social distancing, interactions outside the team atmosphere that were not carefully undertaken, failure to keep on masks, particularly during travel.”

Manfred notes “there was really not an in-depth conversation” about shutting down the season. “We felt that if the protocols had been adhered to in a strict way, it would have avoided the outbreak,” he says.

The commissioner has taken some heat from players in recent weeks; some of them think Manfred is laying too much of the blame for baseball’s COVID-19 cases on them. “The players need to be better,” Manfred said in early August. Cincinnati Reds pitcher Trevor Bauer, for example, took to Twitter, writing that Manfred had a playbook: “blame everything on the players.” Manfred argues that the full context of his comments were about everyone in baseball, not just the players, doing better. “Look, players are responsible for their behavior,” Manfred tells TIME. But he says he can be better, and during the TIME100 Talks conversation he praised the players for changing “deeply ingrained behaviors” and said the overall positive rate is “less than one-tenth of one percent.” Manfred’s “cautiously optimistic” that baseball will be able to crown a World Series champion without having to shut things down because of COVID.

Would better testing help? Baseball doesn’t test players everyday, and sends results out to a lab, for example, in Utah; disease experts have called the system flawed. Manfred doesn’t agree. “Our testing program was designed, built, based on advice of some of the leading experts in dealing with pandemics,” Manfred says. “They’ve given us every assurance that the testing program is up to the job.” While the Marlins and Cardinals cases were unfortunate, says Manfred, they’ve been the only teams to see massive outbreaks, he notes. “I really think the criticism, the idea of doing it every day, we’ve been told does not add significantly to the efficacy of the program.”

Though the outbreaks show that MLB players have been put at health risk, Manfred explained why launching the 2020 season was still worthwhile. He says he’s received thousands of his emails expressing thanks for a return to play: women and Hispanic viewers, Manfred says, are watching baseball in large numbers. “That I think is another sign that baseball is important to the effort to get back to some sort of normalcy in the United States,” Manfred says.

MLB has instituted several changes for this year, like 16-team playoffs. “That could be a change that stays,” he says. Rules like 7-inning doubleheaders, and teams starting an inning with a runner on second-base during extra innings, were instituted to decrease time players spent on the field, and their risk of catching or spreading COVID-19. “I don’t have any strong view that they’ll remain a part of our landscape going forward,” Manfred says. I asked him if he had a favorite: he mentioned the runner on second in the 10th. “I think the one that sort of tells the story of change in baseball is the extra inning rule,” says Manfred. “In general, what happens in our game is, when you put out an idea, you get people who are very engaged with the game who, it’s something different, they react negatively. Our experience has been if you go ahead, make the change, and let people see what it really looks like, they start to like it. And that’s been the case with the extra inning rule. It’s exciting, it does add strategy to it, and has been pretty positively received. Having said that, I’m not committed to any of them staying part of the landscape.”

A team like St. Louis having to make up so many games with seven-inning doubleheaders due to COVID causes complications: a seven-inning game is plenty different one than a nine-inning game. Pitching rotations are altered, teams have less time to make comebacks and blow leads. If teams aren’t playing the same number of games under the same kind of circumstances, can competitive legitimacy to the 2020 season be maintained? “Everybody is going to play some 7-inning doubleheaders, trust me on this, before the season is over,” says Manfred. “I fully expect that that will be the case. It’s not a perfect season. It was never going to be a perfect seasons. It’s just an accommodation to the situation in which we find ourselves.”

While much of Manfred’s focus is, rightly, managing through these unprecedented circumstances, during Time100 Talks he also addressed MLB’s embrace of the Black Lives Matter movement, and strides baseball has made in attracting more African American players: 20% of first round draft picks from the last five years, according to Manfred, are African American. According to one report, just 8.4% of MLB players are Black, a statistic that concerns the commissioner, and that he wants to fix. Why? “It’s a general focus on diversity,” says Manfred. “We want what you see on the field, our product on the field, to look like America. We want to appeal to an African American audience, and if we don’t have African American players, I think it’s a turnoff. And the last piece of it is our history. We are very proud of the role that Jackie Robinson played in changing baseball, and in changing America. And if we want to be proud of that role, you have to accept the responsibility that you need to continue to drive for change.”