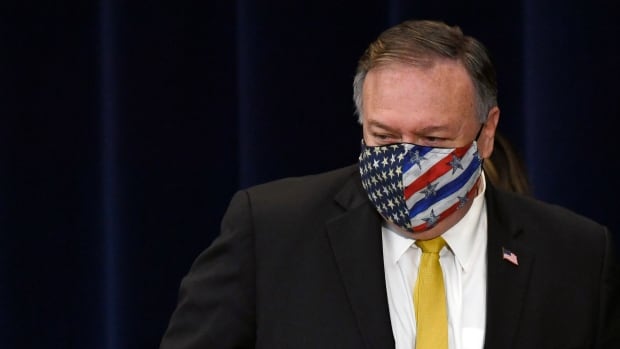 The U.S. House’s foreign affairs committee announced contempt proceedings against Secretary of State Mike Pompeo on Friday, citing his refusal to comply with a subpoena for records into his “transparently political misuse” of department resources.

The Democratic chair of the committee, Eliot Engel, also cited Pompeo’s speech from Jerusalem before the Republican National Convention and said “he has demonstrated alarming disregard for the laws and rules governing his own conduct and for the tools the constitution provides to prevent government corruption.”

“He seems to think the office he holds, the department he runs, the personnel he oversees, and the taxpayer dollars that pay for all of it are there for his personal and political benefit,” Engel said in a statement.

A State Department representative responded to Engel’s statement on Friday, saying it was “political theatrics” and that the department had offered to provide the documents to Engel on the condition that he send a letter explaining the foreign policy issue he is investigating that requires them.

Hunter Biden is a former board member of the Ukrainian energy company Burisma. The company was thrust into the global spotlight last year in the impeachment inquiry into whether Trump improperly pressured the government in Kyiv into opening a case involving his election rival.

Chair <a href=”https://twitter.com/RepEliotEngel?ref_src=twsrc%5Etfw”>@RepEliotEngel</a>: From Mr. Pompeo’s refusal to cooperate with the impeachment inquiry to his willingness to bolster a Senate Republican-led smear against the President’s political rivals to his speech to the RNC… he has demonstrated alarming disregard for the laws &amp; rules. <a href=”https://t.co/YU8p7Q0t9j”>pic.twitter.com/YU8p7Q0t9j</a>

“I gave Mr. Pompeo ample opportunity to fulfil my request for documents, which I first made more than three months ago. These documents were already produced to the Senate, and his refusal to provide them to the foreign affairs committee required that I issue a subpoena on July 31,” Engel said in a statement.

Trump was impeached by the House for abuse of power and obstruction of Congress but later acquitted in the Senate.

The State Department’s Marie Yovanovitch was one of the prominent witnesses during the impeachment trial and subsequently left the department. Democrats have accused Pompeo of not defending the former ambassador, particularly in light of attacks on her character by Trump campaign surrogate Rudy Giuliani.

Calling it a personnel matter, Pompeo refused to say how or if he responded to Giuliani at a Senate hearing last month, drawing the ire of Democratic Sen. Tim Kaine.

“When somebody works for their entire career for the State Department and they are slandered with lies and sacked for no good reason, that sends a message that could not be clearer to other State Department officials,” said Kaine.

Democrats have also raised concerns after Steve Linick, State Department inspector general since 2013, said he was looking into previously reported allegations that Pompeo and his wife may have misused government staff to run personal errands and several other matters. Trump abruptly fired Linick in May.

As well, earlier this month, a State Department inspector general concluded the department did not fully evaluate the risk of civilian casualties in Yemen when it pushed through a huge 2019 precision-guided munitions sale to Saudi Arabia.

“We did everything by the book,” he said. “I am proud of the work that my team did. We got a really good outcome. We prevented the loss of lives.”

Pompeo has managed to receive support from the president in an administration noted for turnover, first as CIA director and then replacing Rex Tillerson as secretary of state. He has often been the lead on the administration’s attacks on China, accusing the country of a “new tyranny,” citing its clampdowns in Hong Kong, its response to the coronavirus, human rights violations of Uighurs and alleged trade abuses.

Republicans are likely to scoff at the effort as an opportunistic gambit from a committee chair who is set to be out of Congress by January. Engel was defeated this summer in a Democratic primary by Jamaal Bowman in an upset that drew comparisons to Alexandria Ocasio-Cortez’s surprise primary victory two years earlier.