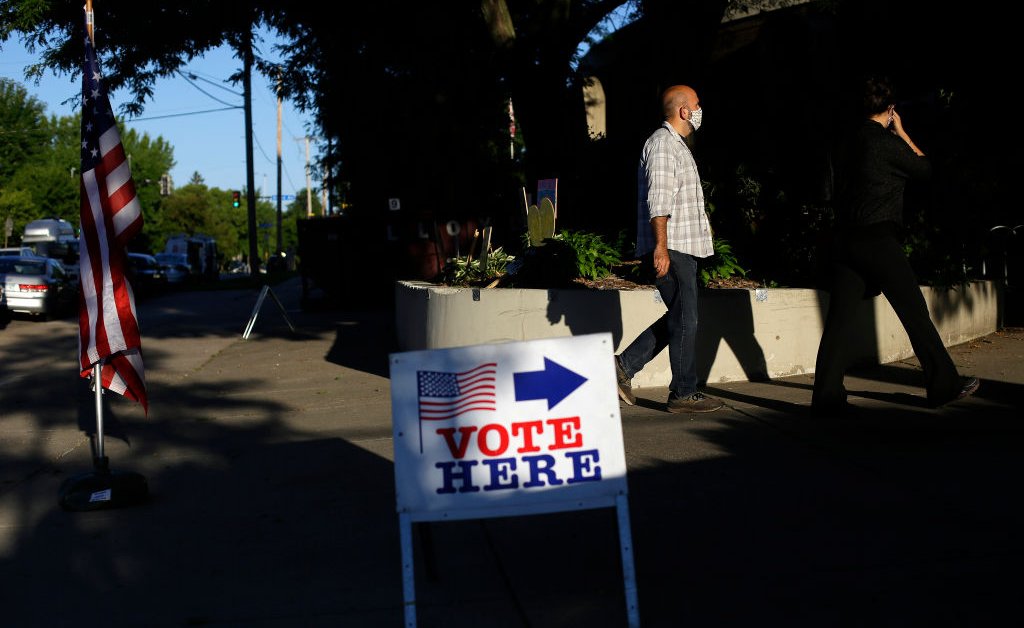 Brian Corley, the supervisor of elections in Florida’s Pasco County, realizes this is not a normal election year.

Anxiety over mail voting, the Covid-19 pandemic, and the on-going national reckoning over systemic racism already create something of a tinderbox, and the country’s growing polarization may set the stage for the most high-stakes election yet. It’s not hard to imagine, Corley says, a minor squabble over a face mask devolving into a confrontation between voters of different political persuasions.

Federal law prohibits the use of troops at polls and the President has no authority over local law enforcement, according to Protect Democracy, a nonprofit that focuses on protecting democratic standards. Top Department of Homeland Security official, Chad Wolf, said that sending agents to polling locations was not the department’s role. Several election officials told TIME they did not believe the President would actually attempt to order law enforcement to the polls, while others said their state laws would explicitly prohibit such federal action.

But Sophia Lin Lakin, deputy director of the ACLU’s Voting Rights Project, says none of these rumors need to turn out to be true for them to have the effect of intimidating voters. Take the President’s promise to send law enforcement to polling places, for instance. “Just the specter of it happening…may deter individuals from going to the polls,” she says. “It’s very understandable that voters may find literally just the statement that the President has made very concerning and troubling.”

Voters of color are often especially vulnerable to voter intimidation tactics. In 2018, false rumors that Immigration and Customs Enforcement (ICE) officers would be patrolling polling places would likely have had a greater affect on immigrant communities. Two years before that, white nationalists touted plans to show up, armed, at polling places to prevent voter fraud. Trump’s promise to send law enforcement to polling places may disproportionately deter Black voters, who are most likely to have deadly or harmful encounters with police.

Minnesota Secretary of State Steve Simon says part of the challenge is defining what, exactly, voter intimidation looks like, since it can take “multiple and subtle forms.” “It can be as simple as calling into question conventional and widely used methods of voting, so as to dissuade someone from voting in a particular way,” he explains.

Voting-access advocates say it’s difficult to gauge how widespread voter intimidation is, or to measure its impact, in part because the tactics are often so insidious. One problem is that voter intimidation efforts are often very public, cloaked in the perception of legitimacy—the idea of “protecting” the election from fraud.

Republicans have long insisted that they must closely monitor polls to prevent voter fraud that they have not been able to show exists. Even a voter fraud commission Trump’s administration put in place was disbanded by 2018 after failing to identify any widespread voter fraud. Studies have also shown that election fraud is rare in the U.S. But such findings have not prevented President Trump from repeatedly suggesting otherwise.

While both parties use poll monitors, this year poses particular challenges because of social distances requirements necessitated by COVID-19. In Madison, Wisconsin, for example, Maribeth Witzel-Behl, the city clerk, says that some sites may need to limit the number of poll observers allowed. “We need to make sure we’re able to keep the poll workers and the voters safe, keeping everybody six feet apart, and we’ll require all of our observers to wear masks, and we’re going to only have so much space available for them,” Witzel-Behl says.

For now, election officials are focused on educating voters as best they can. The top-line message? Mail-in ballots are safe; drop boxes are secure; and you can have confidence in the results of an election. But that doesn’t mean you should be sanguine about your vote. Election officials encourage voters to cast their ballots as early as possible, and to brace themselves for the possibility that the election results may not be known for days or weeks after Nov. 3.

In the meantime, says Kristen Clarke, President of the National Lawyers’ Committee for Civil Rights Under Law, voting-access advocates are on the look out for new and innovative ways to scare voters into staying home. “We’re watching vigilantly,” she says.