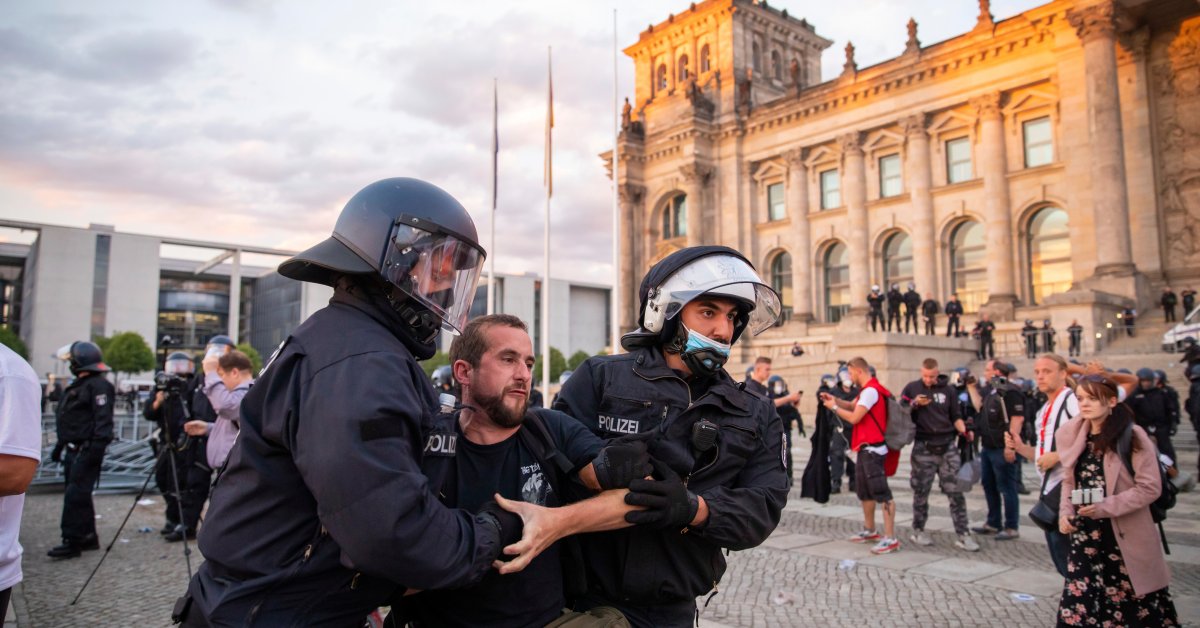 BERLIN — Senior German officials on Sunday condemned attempts by far-right protesters and others to storm the parliament building following a protest against the country’s pandemic restrictions.

Hundreds of people, some waving the flag of the German Reich of 1871-1918 and other far-right banners, breached a security barrier outside the Reichstag late Saturday but were intercepted by police and forcibly removed.

“Reich flags and right-wing extremist provocations in front of the German Bundestag are an unbearable attack on the heart of our democracy,” Germany’s president, Frank-Walter Steinmeier, said Sunday. “We will never accept this.”

Steinmer said people had the right to express their anger about the coronavirus restrictions and to question them publicly, including with demonstrations.

“My sympathy ends where protesters allow themselves to be used by enemies of democracy and political agitators,” he added.

Police used pepper spray to drive back the protesters, who earlier in the day had participated in a large rally through the capital.

About 300 people were arrested in front of the Reichstag and following an incident at the Russian embassy, according to police.

Berlin’s top security official, Andreas Geisel, praised three officers who had stood alone against the protesters outside the Reichstag until reinforcements arrived. Opposition parties criticized the police’s failure to station sufficient officers around Parliament despite public warnings from far-right extremists that they planned to try to enter the building.

Robert Habeck, the co-leader of Germany’s Green party, called for a thorough investigation into the incident.

“The fact that Nazis with imperial war flags try to storm the Bundestag recalls the darkest period in German history,” he told the Funke media group.

“An incident like on Saturday evening must not be allowed to happen again,” Habeck said. “I expect (federal) Interior Minister Horst Seehofer to decisively combat right-wing extremism at all levels.”

The head of Chancellor Angela Merkel’s center-right party, Annegret Kramp-Karrenbauer, expressed anger at the incident. “That the Reich flag should fly again at the German Bundestag is intolerable,” she said.

The co-leader of the far-right Alternative for Germany party, Alice Weidel, described the protesters who tried to storm the building as “a few vandals” whose behavior was unacceptable. Members of her party had taken part in the rally against the pandemic restrictions earlier in the day.

Germany’s Vice Chancellor Olaf Scholz, who is seeking to succeed Merkel in next year’s election, said he was confident security forces would closely analyze what had happened Saturday and ensure it couldn’t occur again.

But he insisted that the incident shouldn’t distract from the fact that “the overwhelming, very big majority of citizens in this country are clever and sensible, and they agree with all of the decisions that we took to protect people’s health and for the benefit of the economy and social cohesion.”

Opinion polls show only one in 10 Germans reject the country’s current prevention measures, such as the requirement to wear masks on public transport, in stores and in some public buildings such as libraries and schools.

Police on Sunday ordered an anti-mask gathering of about 2,000 people at the Victory Column to disband, saying people weren’t respecting distancing rules. Several people were detained.