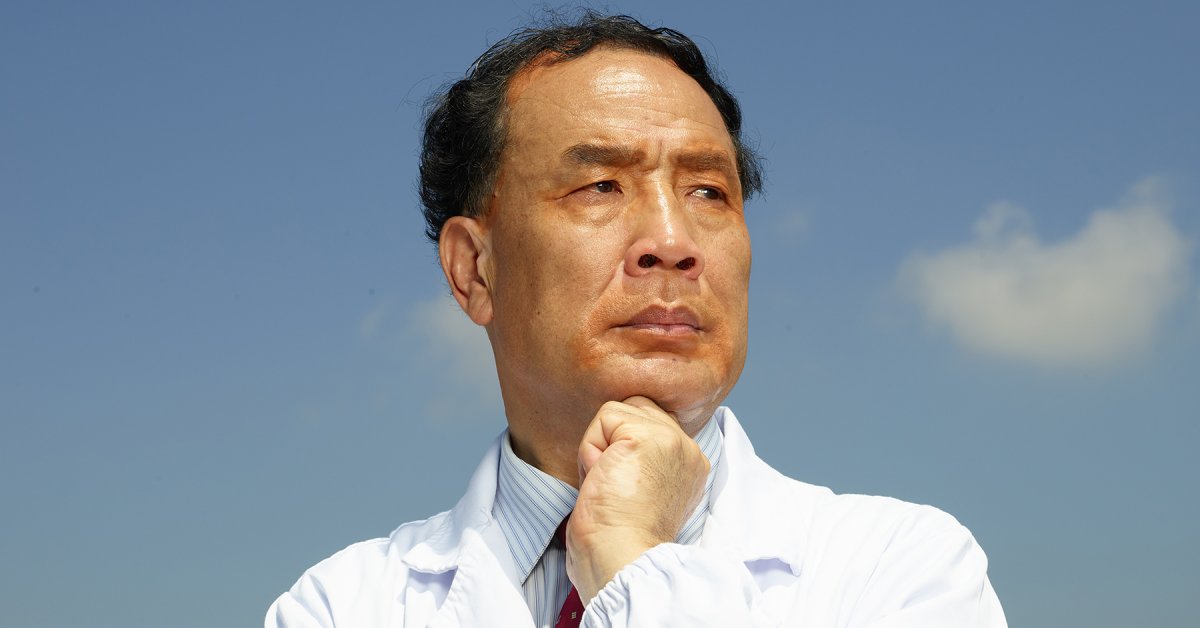 Over the past few years, Professor Zhang Yongzhen has made it his business to sequence thousands of previously unknown viruses. But he knew straight away that this one was particularly nasty. It was about 1:30 p.m. on Jan. 3 that a metal box arrived at the drab, beige buildings that house the Shanghai Public Health Clinical Center. Inside was a test tube packed in dry ice that contained swabs from a patient suffering from a peculiar pneumonia sweeping China’s central city of Wuhan. But little did Zhang know that that box would also unleash a vicious squall of blame and geopolitical acrimony worthy of Pandora herself. Now, he is seeking to set the record straight.

Zhang and his team set to work, analyzing the samples using the latest high-throughput sequencing technology for RNA, the viral genetic building blocks, which function similar to how DNA works in humans. By 2 a.m. on Jan. 5, after toiling through two nights straight, they had mapped the first complete genome of the virus that has now sickened 23 million and killed 810,000 across the globe: SARS-CoV-2. “It took us less than 40 hours, so very, very fast,” Zhang tells TIME in an exclusive interview. “Then I realized that this virus is closely related to SARS, probably 80%. So certainly, it was very dangerous.”

The events that followed Zhang’s discovery have since become swathed in controversy. Crises beget scapegoats and the coronavirus is no different. The floundering U.S. response to the pandemic has prompted a wave of racially tinged soundbites, such as “China virus” and “Kung Flu,” as President Donald Trump’s Administration seeks to divert blame onto the nation where the pathogen was first identified. “The outbreak of COVID angered many people in the Administration and presented an election issue for President Trump,” Ambassador Jeffrey Bader, formerly President Obama’s chief adviser on Asia, said at a recent meeting of the Foreign Correspondents Club of China.

Read more: Inside the Global Quest to Trace the Origins of COVID-19—and Predict Where It Will Go Next

Upon first obtaining the genome, Zhang says he immediately called Dr. Zhao Su, head of respiratory medicine at Wuhan Central Hospital, to request the clinical data of the relevant patient. “I couldn’t say it was more dangerous than SARS, but I told him it was certainly more dangerous than influenza or Avian flu H5N1,” says Zhang. He then contacted China’s Ministry of Health and traveled to Wuhan, where he spoke to top public health officials over dinner Jan. 8. “I had two judgements: first that it was a SARS-like virus; second, that the virus transmits by the respiratory tract. And so, I had two suggestions: that we should take some emergency public measures to protect against this disease; also, clinics should develop antiviral treatments.”

Afterward, Zhang returned to Shanghai and prepared to travel to Beijing for more meetings. On the morning of Jan. 11, he was on the runway at Shanghai Hongqiao Airport when he received a phone call from a colleague, Professor Edward Holmes at the University of Sydney. A few minutes later, Zhang was strapped in for takeoff and still on the phone—then Holmes asked permission to release the genome publicly. “I asked Eddie to give me one minute to think,’” Zhang recalls. “Then I said ok.” For the next two hours, Zhang was cocooned from the world at 35,000 feet, but Holmes’ post on the website Virological.org sent shockwaves through the global scientific community.

By the time Zhang touched down in Beijing, his discovery was headline news. Officials swooped on his laboratory to demand an explanation. “Maybe they couldn’t understand how we obtained the genome sequence so fast,” says Zhang. “Maybe they didn’t fully believe our genome. So, I think it’s normal for the authorities to check our lab, our protocols.”

Read more: China Says It’s Beating Coronavirus. But Can We Believe Its Numbers?

Critics of China’s response have latched onto the Jan. 11 date of publication as evidence of a cover-up: why, they ask, didn’t Zhang publish it on Jan. 5, when he first finished the sequencing? Also, Zhang’s lab was probed by Chinese authorities for “rectification,” an obscure term to imply some malfeasance. To many observers, it seemed that furious officials scrambling to snuff out evidence of the outbreak were punishing Zhang simply for sharing the SARS-CoV-2 genome—and in the meanwhile, slowing down the release of this key information.

Yet Zhang denies reports in Western media that his laboratory suffered any prolonged closure, and instead says it was working furiously during the early days of the outbreak. “From late January to April, we screened more than 30,000 viral samples,” says Fan Wu, a researcher who assisted Zhang with the first SARS-CoV-2 sequencing.

And, in fact, Zhang insists he first uploaded the genome to the U.S. National Center for Biotechnology Information (NCBI) on Jan. 5—an assertion corroborated by the submission date listed on the U.S government institution’s Genbank. “When we posted the genome on Jan. 5, the United States certainly knew about this virus,” he says. But it can take days or even weeks for the NCBI to look at a submission, and given the gravity of the situation and buoyed by the urging of colleagues, Zhang chose to expedite its release to the public, by publishing it online. (Approached by TIME, Holmes deferred to Zhang’s version of events.) It’s a decision that facilitated the swift development of testing kits, as well as the early discussion of antivirals and possible vaccines.

Read more: ‘We Will Share Our Vaccine with the World.’ Inside the Chinese Biotech Firm Leading the Fight Against COVID-19

Zhang, 55, is keen to downplay the bravery of his actions. But the stakes of doing what is right over what one is told are rendered far higher in authoritarian systems like China’s. Several whistleblower doctors were detained early in the pandemic. According to a Jan. 3 order seen by respected Beijing-based finance magazine Caixin, China’s National Health Commission, the nation’s top health authority, forbade the publishing of any information regarding the Wuhan disease, while labs were told to destroy or transfer all viral samples to designated testing institutions. Caixin also reports that other labs had processed genome sequences before Zhang obtained his sample. None were published.

It’s difficult to know what conclusions to draw. Dr. Dale Fisher, head of infectious diseases at Singapore’s National University Hospital, says he doesn’t think that any delay by the Chinese authorities was malicious. “It was more like appropriate verification,” he says. Fisher traveled to China as part of a World Health Organization (WHO) delegation in early February and says outbreak settings are always confusing and chaotic with people unsure what to believe. “To actually have the whole genome sequence by early January was outstanding compared to outbreaks of the past.”

Of course, Zhang’s fears based on the viral genome were just one evidence strut to inform China’s decision-making process, alongside public health data and clinical reports about specific cases. Despite mounting evidence of human-to-human transmission, including doctors falling ill, it was only on Jan. 20 that China officially confirmed community transmission. Two days later, Wuhan’s 11 million residents were placed on a bruising lockdown that would last for 76 days. Even while the WHO publicly praised China for transparency, internal documents seen by the Associated Press suggest health officials were privately frustrated by the slow release of information. One joint study by scientists in China, the U.K. and U.S. suggests there would have been 95% fewer cases in China had lockdown measures been introduced three weeks earlier. Two weeks earlier, 86% fewer; one week, 66% fewer.

Read more: ‘I Told Myself to Stay Calm.’ As Wuhan’s Lockdown Ends, A Doctor Recalls Fighting Coronavirus on the Front Line

Yet there was some historical basis for skepticism about the severity of the emerging viral disease. After all, the last global pandemic—the swine flu outbreak of 2009—was far less deadly than initially feared, mainly because many older people had some immunity to the virus, leading to criticism that the WHO was overly hasty and even overly dramatic in declaring a pandemic when the virology didn’t warrant it. “In China, even though we had a very bad experience with SARS and other diseases, in the beginning nobody—not even experts from China’s CDC and the Ministry of Health—predicted the disease could be quite so bad,” says Zhang.

Donald Trump disagrees. He has repeatedly claimed that swifter action by China could have stopped the pandemic in its tracks. “The virus came from China,” Trump said Aug. 10. “It’s China’s fault.” Beijing concedes that mistakes were made at the outset, though insists that blame lies solely with bungling local officials (who have since been punished for those failures), while the central government’s response was exemplary. This is, of course, its own politically motivated oversimplification. On both sides, wild accusations have eclipsed reason as Sino-U.S. relations spiral to an unprecedented nadir. While U.S. officials have suggested that COVD-19 originated in a Wuhan laboratory, their Chinese counterparts have propagated conspiracy theories that the U.S. military is responsible. “It’s not a good thing for China and the U.S. to be involved in this struggle,” says Zhang. “If we can’t work together, we can’t solve anything.”

Some facts are undeniable. The first U.S. case was confirmed on Jan. 21—a man in his 30s who had just returned from Wuhan to his hometown in Washington State. Japan confirmed its first coronavirus case one day later, and reported the world’s highest infection number early in the outbreak, before getting a handle on the situation. Today, the U.S. has 16,407 cases per million population compared with 462 in Japan. Across the world, authoritarian and democratic nations have both handled the crisis well and poorly.

For its part, the global scientific community has risen to the challenge, working across national boundaries to advance understanding of the disease, including priceless collaborations between Chinese and Western virologists. Previously, the best described epidemic in terms of viral genetics was the 2014 West African Ebola outbreak. Then, about 1,600 genomes were mapped over three years, providing insights into how viruses move between locations and accumulate genetic differences as they do. But for SARS-CoV-2, following Zhang’s initial genome, scientists mapped about 20,000 within three months. Genomic surveillance enables scientists to trace the speed and character of genetic changes, with ramifications for infection rates and the production of vaccines and antivirals. “Very large-scale genomic screening can evaluate whether any resistance mutations have occurred and, if they do, how those spread through time,” says Oliver Prybus, professor of evolution and infectious disease at Oxford University.

For Zhang, focus must now be on understanding how pathogens and the environment interact. Over the past century, an inordinate number of new viral diseases have emerged in China, including the 1956 Asian Flu, 2002 SARS and 2013 H7N9. Zhang attributes this to China’s diverse ecology and enormous population. Moreover, as China’s economy boomed its people have begun traveling far and wide in search of work, education and opportunities. According to the World Bank, almost 200 million people moved to urban areas in East Asia during the first decade of the 21st century. In China, 61% of the population lived in urban areas in 2020 compared with just 18% in 1978. This brings unknown pathogens and people without natural defenses into close proximity. “People and pathogens must be in contact [for outbreaks],” says Zhang. “If no contact, no disease.”

As urbanization intensifies, outbreaks of pathogenic diseases will only become more common. Mitigation, says Zhang, comes from deeper understanding of viruses, so that we can accurately map and predict which are likely to spill over into human populations. Just as satellites have made forecasting weather patterns unerringly reliable, Zhang believes science holds the key to predicting viral outbreaks with similar accuracy as with which we now anticipate typhoons and tornadoes. “If we don’t learn lessons from this disease,” says Zhang, “humankind will suffer another.”