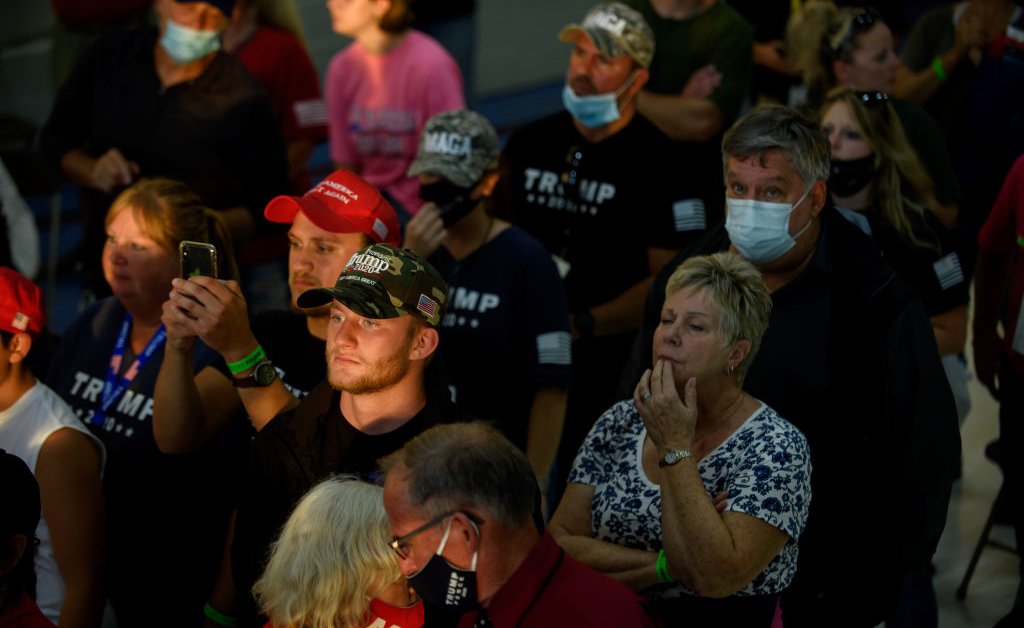 When Donald Trump described Democratic Presidential nominee Joe Biden as a “puppet” of “the cop-hating extremists” and claimed that “the rioters are voting for Biden” during a small rally broadcast from an airplane hangar in Latrobe, Pa. on Thursday night, he was speaking directly to voters like JoAnn Clickner.

Clickner, 85, who retired from an electric company job, lives in Racine, Wis.,—another key battleground state, and voted for Trump in 2016. She’s voting for him again, she says, because she believes “he can control things better than Biden,” who she describes as “too soft.” “We need a leader,” she adds, “a ruler who can handle things.”

Trump’s relentless hammering on voters’ fears isn’t happening by accident. His campaign has shelled out millions of dollars in the past two weeks on ads depicting burning cars, destroyed shops, and other violence in American cities in an effort to supercharge the fears of voters like Clickner and to define Biden as weak on crime. Trump has hit that message repeatedly in his tweets, while accepting his party’s nomination in front of the White House, and during his visit Tuesday to Kenosha, Wis., where protests erupted after a police officer was caught on video shooting Jacob Blake in the back.

The problem, pollsters say, is that voters who are most receptive to this fear campaign are already on Team Trump—and they’re not enough to hand him a win on Election Day. To secure a second term, Trump has to win over a narrow band of undecided voters in key swing states. At this point, they don’t like Trump as a person and don’t appreciate his incendiary outbursts, but they are not convinced on Biden either. They make up between 6% and 10% of the electorate—just a sliver at a point in the election cycle when more undecided votes are usually up for grabs—and are generally between the ages of 50 and 68, holding down jobs that put them in the bottom band of the middle class.

Polling shows that most voters aren’t buying Trump’s depiction of protestors as violent. Instead, they distinguish between those in the streets calling for racial justice and agitators burning shops and attacking police. Some 41% of Americans saw the protestors as “mostly peaceful” and 40% said they were “mostly violent,” according to a recent The Economist/YouGov poll. At this point, more voters—55%—think Trump’s statements about the protests have made the situation worse, according to an ABC News/Ipsos poll released Thursday. The same poll found that 55% of voters also believe Biden would do a better job keeping the country safe.

Another reason Trump’s fear mongering hasn’t yet landed with voters at this point in the cycle is that violence and public safety are not their top concern at the moment. The pandemic ranks higher, says Whit Ayers, a Republican pollster. Businesses have tanked, schools have been shuttered, and nearly 200,000 Americans have died from COVID-19. Voters “want to get their lives back. They want to get their kids back in school. They want to see sports start,” Ayers says.

All of which means the Trump campaign’s appeal to voters’ fears could backfire. For one thing, Trump is amplifying scenes of unrest in a country he already leads. “Usually if you’re complaining about the state of the country, you’re somebody trying to unseat the President, not the President himself,” says Heather Richardson, a historian at Boston College. “It puts the President in a funny position of needing to create trouble in his own country in order to argue that he needs to be there to save it. That’s really unusual.” In her research of American political history, Richardson says she hasn’t seen a president interject this much tension into the country since Andrew Johnson stirred up anti-Reconstruction violence during the 1866 midterms, when he was trying to regain control of Congress to stop efforts to enfranchise Black Americans.

While civil rights and anti-Vietnam protests roiled cities in 1968, Richard Nixon ran a campaign ad that showed images of guns, knives and screaming protestors facing off with police, with Nixon’s voice saying, “the wave of crime is not going to be the wave of the future.” It ended with the message: “This time vote like your whole world depended on it.” During Nixon’s speech at the Republican National Convention in Miami Beach, Florida in August 1968, he beseeched “forgotten Americans” to elect him, described “sirens in the night” and “cities enveloped in smoke and flames,” and said “the nation with the greatest tradition of rule of law is plagued by unprecedented lawlessness.”

But Nixon wasn’t President at that time. His criticism was leveled against the Democratic administration of Lyndon Johnson, who decided not to run for reelection. Nixon took the White House by a narrow margin during a similar moment of polarization and unrest. While Trump’s campaign has echoes of Nixon, political strategists say, there are signs Trump may be pushing the message too far.

Republican pollster Frank Luntz says one problem is that Trump is talking about problems—violence, rioting—rather than the solution: public safety. “Donald Trump is talking about the right topics but using the wrong language,” he says. Luntz’s polling has found conflicting cross-currents among voters. The majority of Americans support the police, but they also support the protests for racial justice and believe the country needs better accountability.

The next 60 days will be defined largely by each candidate’s attempt to define the other. Trump is working to paint Biden as weak, ineffective, and beholden to leftist extremists and anti-facist demonstrators, while Biden is taking aim at Trump’s character, making the case that the President is increasing tensions during a tumultuous time.

Trump has repeatedly shown either he doesn’t understand—or, perhaps, prefers to ignore—protesters’ demands that police stop disproportionately using deadly force against Black people and address an entrenched, systemic racism that disadvantages Black people. During a community roundtable in Kenosha on Tuesday Trump said he thought the structural change people were looking for is more support for police. “That’s the change they want. They want law and order. They want the police to be police.” When a reporter asked Trump if systemic racism was a major problem in the country, Trump responded by talking about the violence that’s erupted around the largely peaceful protests calling for an end to racist police practices. “We should talk about the kind of violence that we’ve seen in Portland and here and other places,” Trump said, adding “It’s tremendous violence.”

Trump’s words resonate deeply with his base. Debby Baartz, 43, who has family living in Kenosha and lives just over the state line in Illinois, voted for Trump in 2016 and plans to vote for him again. She says her family members in Kenosha have had “a lot of sleepless nights, where we’re sleeping in the living room, scared that these outsiders are gonna come in and torch our house. It’s not our neighbors.”

By contrast, when Biden visited Kenosha on Thursday, he met with Jacob Blake’s family and spoke with Blake on the phone for 15 minutes. “I think ultimately, what’s been unleashed for a lot of people is they understand that fear doesn’t solve problems, only hope does,” Biden said during a community meeting in Kenosha. “[Trump] may believe mouthing the words ‘law and order’ makes him strong, but his failure to call on his own supporters to stop acting as an armed militia in this country shows you how weak he is,” Biden said in Pittsburgh on Monday.

The problem for Biden, Luntz says, is that he has to find a way to break through Trump’s preternatural ability to dominate the news cycle and bend the national discussion to what he wants to talk about. “If he’s going to be passive in the campaign, Trump will run over him,” Luntz says. All of this raises the stakes for the three scheduled Presidential debates, with the first slated to be moderated by Fox News’s Chris Wallace on Sept. 29 in Cleveland, Ohio. The debates come at a time when distrust of news outlets, politicians and government institutions is widespread and voters are looking for “authenticity,” says Luntz. It will be up to voters to decide just how much the country has to fear.

With reporting by Charlotte Alter/Kenosha, Wis.