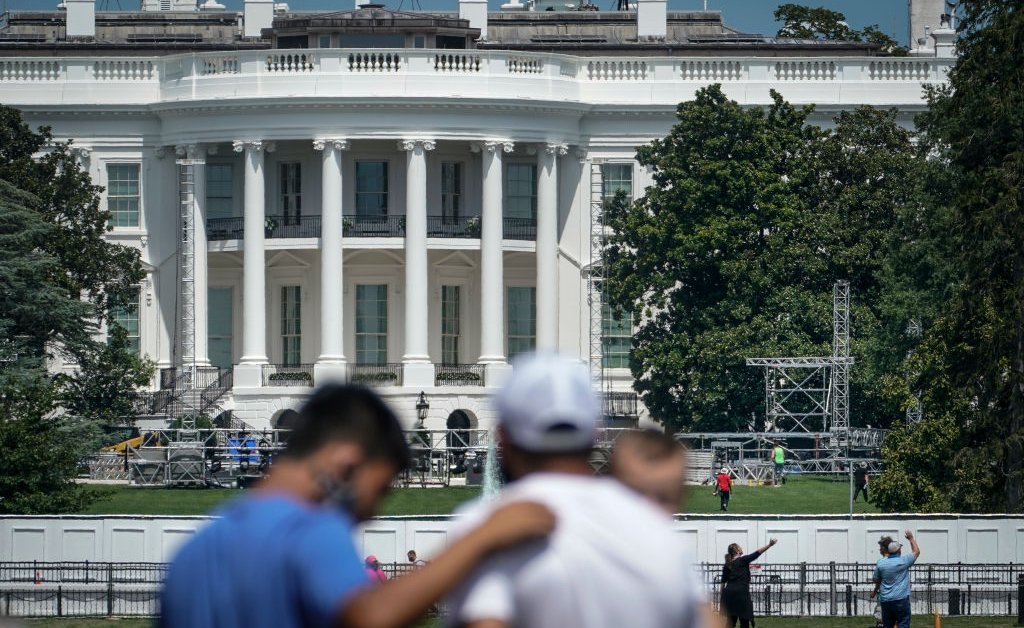 The ad has Joe Biden and Kamala Harris’s names written in jagged, horror-movie script. Images of burning cars and protestors scroll behind their heads. “Don’t let them ruin America,” reads the title.

As Republicans put the finishing touches on their convention slated to start Monday, the Trump campaign blitzed social media and streaming services with a nearly $10 million ad buy to counter the Democrat’s feel-good convention program, according to a campaign official, running video clips in front of millions of Americans who visited YouTube, watched Hulu, or browsed their Facebook feeds.

The series of ads scrolled through clips showing Democrats as beholden to the “radical leftist mob,” questioning Biden’s mental acuity, his record on race, and accusing him of being unwilling to stand up to China. At the end of one, an older woman is shown dialing the police while someone dressed in all black breaks into her house. “You won’t be safe in Joe Biden’s America,” an announcer says.

The dark images stood in stark contrast to the crisply produced, socially distant infomercial that was the Democratic National Convention, hosted over four nights by television stars to showcase themes of condolence and grief, empathy and compassion. And with the pandemic preventing an in-person event, Democrats gave Republicans no scandal to latch onto. The proceedings weren’t punctuated by scenes of protest, infighting or booing as at past conventions. Biden didn’t stumble during his acceptance speech. No one called for eliminating the police.

The challenge for Republicans next week will be to lay out a vision for the country that isn’t stuck in dark mode. “The future of our country, and indeed our civilization, is at stake,” Trump said during a speech Friday to the Council for National Policy, a conservative activist group. “The only thing standing between the American Dream and total anarchy, madness, and chaos,” he said.

Such stark attacks on Democrats won’t be enough to shovel Trump out of the low approval ratings and polling deficit he faces, says Whit Ayers, a Republican pollster and political consultant. Trump should spend more time laying out how he’s fixing the country’s response to the pandemic, which is the most pressing challenge to his poll numbers, he says.

“Republicans need to give the American people some hope that we have a well-thought out plan and strategy to get on top of this pandemic so that we can begin to turn our economy around and open our schools,” says Ayers. “Right now it looks like the pandemic is controlling us rather than us controlling the pandemic, and that’s not a good place to be when you’re the governing party.”

But Trump’s campaign doesn’t want to linger too long on the virus that is still raging around the country. Trump’s theme for the convention is “Honoring the Great American Story,” a message campaign officials say differs from the gloomy picture of a country grappling with a pandemic and systemic racism depicted by Democrats. “Our convention will be a platform for the forgotten men and women who are forgotten no more,” said one campaign official. “The overall message is the President has built the world’s best economy once and he’s in the process of doing it again,” says the official. “He’s our most effective messenger. He’s the most powerful weapon we’ve got.”

Until the end of July, Trump was hoping to harness that power before live audiences in Jacksonville, Florida. When the Roy Cooper, the Democratic governor of North Carolina, wouldn’t guarantee the GOP would be allowed by the state to hold its full convention in Charlotte because of the pandemic, Trump shopped around for another venue to give his acceptance speech and landed on Jacksonville.

But cases then spiked in Florida and Trump relented, agreeing to hold a much smaller convention based in Charlotte and give his acceptance speech at the White House. More than 300 Republican delegates will convene at the Charlotte Convention Center on Monday for the party’s official business. The last-minute changes sent Trump campaign aides scrambling to build a lineup of speakers for a live-streamed event.

Now, when the GOP convention kicks off on Monday, Trump will travel with his daughter and senior advisor Ivanka Trump to Mills River, North Carolina to see a program handing out boxes of food and fresh produce to people struggling during the pandemic’s economic downturn. Later that day, he’s expected to go in person to Charlotte, where delegates are meeting, to make an appearance on the first night. Trump will play a major role every night of the convention, says a senior campaign official.

The convention will also feature headlining speeches from First Lady Melania Trump on Tuesday night and Vice President Mike Pence on Wednesday night. On Thursday, Trump will give his acceptance speech from the South Lawn of the White House, which has drawn fierce criticism from Democrats for using the White House for such an overtly political event. His remarks will end with a fireworks display over the Washington Monument.

As his campaign scrambles to outdo the DNC, Trump has made it clear he isn’t planning to rely on speeches and campaigning alone to try to influence the outcome of the election in November. He has been building in a hedge, repeatedly and falsely claiming that mail-in voting could taint the vote count. He doubled down on this unfounded conspiracy on Friday. “You’re not going to be able to know the end of this election, in my opinion, for weeks, months — maybe never,” Trump said Friday, because of supposed delays in counting the mailed in ballots. “It may be years, but maybe never. Because once you go past the first week, you’re never going to know.”