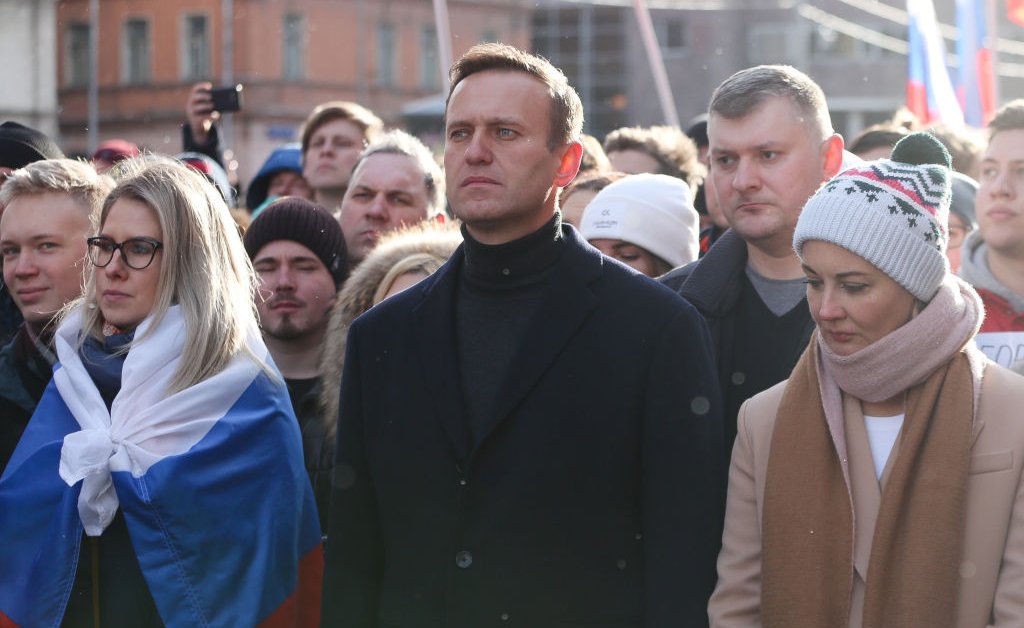 The German chancellor, Angela Merkel, confirmed what many had suspected on Sep. 2 — that the Russian opposition leader Alexei Navalny, currently in a coma in a Berlin hospital, had been poisoned by a nerve agent developed in the Soviet Union and Russia.

Merkel said testing by a special military laboratory had shown “unequivocal” proof that Navalny, who has published multiple allegations of corruption by officials from President Vladimir Putin’s United Russia party, was the victim of the nerve agent known as “Novichok.” The German leader called Navalny a “victim” of a crime that was intended to “silence” him. “This raises very difficult questions that only the Russian government can answer, and has to answer,” she said.

Few people knew what Novichok was before 2018 when U.K. officials detected the military grade nerve agent in the poisoning of former double agent Sergei Skripal, and his daughter Yulia in the city of Salisbury, England. Local resident Dawn Sturgess was later exposed to the same nerve agent and died in hospital. The U.K. accused two operatives from Russia’s military intelligence service (G.R.U.) of the attack, charges that Russia denied.

Navalny, 44, collapsed on Aug. 20 on a flight from Siberian city of Tomsk to Moscow. His spokesperson said she suspected he was poisoned from a cup of black tea he drank at an airport cafe earlier that day. The hospital where he was initially being treated in Omsk said on Aug. 21 they found no traces of poisoning and diagnosed Navalny with a metabolic disease that may have been caused by low blood sugar.

After intense lobbying by his family and supporters, the Kremlin gave permission for Navalny to be transferred to Berlin on Aug 22., where he has been in an induced coma since. In a letter addressed to the Russian president’s administration on 21 Aug., Yulia Navalnaya wrote that her husband “needs qualified medical assistance”.

Navalny’s condition “continues to improve” the Charité hospital treating Navalny said on Sept. 3. But doctors warned that “recovery is likely to be lengthy. It is still too early to gauge the long-term effects which may arise in relation to this severe poisoning.” But beyond the activist’s health, the effects for his country and the world may be similiarly lengthy:

Does the discovery of Novichok prove that Putin poisoned him?

Navalny’s supporters say the nerve agent carries the hallmarks of Kremlin involvement. “Choosing Novichok to poison Navalny in 2020 is basically the same thing as leaving an autograph at the scene of the crime,” Leonid Volkov, Navalny’s chief of staff, wrote on Twitter, attaching an image of Putin’s signature. Ivan Zhdanov, a Navalny aide, tweeted: “Only a government can do this.”

Ben Noble, a lecturer in Russian politics at University College London, says the use of Novichok suggests one of three scenarios: either Putin ordered Russia’s security service or military intelligence to take out Navalny; or Putin gave his tacit approval for another actor’s initiative to poison Navalny; or the state was not involved and Putin no longer has control over how chemical weapons are used in his country.

Some experts say it’s not inconceivable that a private citizen obtained the nerve agent. “If you’re in the inner circle of Putin, if you’re the rich and powerful, you can probably get access to Novichok,” says Mark Galeotti, a Russia expert at the Royal United Services Institute. “This is not a deeply regimented country that people sometimes assume,” he says.

Tatiana Stanovaya, founder and CEO of political analysis firm R.Politik, doubts Putin made the order even if the secret service might have been involved. “Putin does not see Navalny as a big threat, but there are many players around him who do see him as an enemy and would be willing to protect the regime from him,” she says. The president may not even know what happened yet, she adds.

How are international leaders pressing the Kremlin?

Merkel has promised an investigation by the E.U. and NATO. British Prime Minister Boris Johnson condemned the poisoning as “outrageous”. “The Russian government must now explain what happened to Mr Navalny – we will work with international partners to ensure justice is done,” he tweeted.

The U.S. National Security Council (NSC) said the suspected poisoning was “completely reprehensible” and that it “will work with allies and the international community to hold those in Russia accountable, wherever the evidence leads, and restrict funds for their malign activities,” in a series of tweets on Sep. 2. But U.S. President Donald Trump has remained quiet on the issue. When asked on Aug. 20 about Navalny’s hospitalization, Trump said “We haven’t seen it yet, we’re looking at it, and Mike [Pompeo]’s going to be reporting to me soon.”

The E.U urged Russia to conduct a “transparent” investigation into the poisoning, and Jens Stoltenberg, Secretary-General of the NATO defence alliance, also called for an inquiry in a tweet. NATO members will discuss the poisoning at a special meeting today.

Galeotti warns that a Russian investigation will not be “transparent or have necessary international involvement”, citing its limited investigation into the 2015 killing of Russian opposition leader Boris Nemtsov as one such example.

Are there likely to be fresh sanctions on Russia or on Putin?

It’s possible. Some analysts say they expect the Western governments to expel Russian diplomats and bring in sanctions. The E.U. said on Sep 3 that sanctions would be possible only when it was established who was responsible for Navalny being poisoned.

In the Skripal case, the U.K. persuaded 20 countries to expel a combined total of 200 Russian diplomats in the largest collective diplomatic punishment since World War II. “It was a triumph of British diplomacy and it really took Russia aback,” says Galeotti. “It put a significant shift in their intelligence activities and it was embarrassing for a country that tries to present itself as a great power,” he added.

However, Stanovaya says she doubts there will be a strong diplomatic pushback because Navalny was attacked on Russian soil, whereas Westminster took the poisoning of the Skripals in Salisbury as an attack on U.K. national security. In March 2018, then Prime Minister Theresa said “this was not only a crime against Sergei and Yulia Skripal. It was an indiscriminate and reckless act against the United Kingdom”.

In Germany, some political figures favor more severe measures than diplomatic expulsions. Norbert Roettgen, a leading lawmaker in Merkel’s party and a potential successor to the chancellor, said “diplomatic rituals are no longer enough,” in an interview with Deutschlandfunk radio on Sept 2.

Pressure is now mounting across the German political spectrum for the Chancellor to take punitive action over the Nord Stream 2, a 760-mile gas pipeline that is being built to carry natural gas directly from Russia to Germany. Some E.U. countries say it will increase Europe’s dependence on Russian gas, and Trump, who considers the pipeline a security threat to Europe, introduced sanctions last year on some firms involved. “We must respond with the only language Putin understands – that is gas sales,” Roettgen said.

But it’s unclear if Merkel will submit. Asked last week whether Germany should pull out of the project because of the attack against Navalny, she said the two issues were separate. “It’s not appropriate to make a linkage between the Navalny issue and a project that is commercially driven,” she said.

How is Russia responding?

Russia has rejected Merkel’s claims on Navalny and accused Germany of not providing Moscow with any evidence about his condition. “The Russian side has not received a single document on this issue,” said Russian Foreign Ministry spokesperson Maria Zakharova in a Sept. 3 interview with Russia 24, a state-backed news channel. “There’s nothing to reply to,” she said.

For Putin, experts say, these accusations are a geopolitical attack. “It’s not about Navalny, it’s about destroying Russia,” says Stanovaya. “Russia will push for Germany to obtain all the proof. But it will never be enough,” she says.

How will Navalny’s poisoning affect the opposition?

It is a “big strike” against the opposition, says Stanovaya — and one that comes after Putin has already spent years threatening, arresting and jailing Kremlin critics, introducing laws that cast certain kinds of criticism of the government as threats to state security, and forcing civil society organizations to shut. In July, Navalny was forced to close his Anti-Corruption Foundation due to hefty court fines imposed over one of its investigations.

But the apparent attempt on Navalny’s life could also mobilise anti-Putin sentiments and prompt discontent and anger. “It’s possible that people who are unsure about their political views will be outraged and turn to supporting an anti-Putin figure,” she adds. Sergei Shnurov, a public figure and member of the center right Growth Party, said that before the possible poisoning of Navalny he was “indifferent” to him and now he is “for him”, in a poem posted on his social media. He also suggested he will send money to the opposition leader’s anti-corruption activists.

Putin will continue to distance itself from any involvement in Navalny’s poisoning, says Noble. Given recent mass protests in the Russian city of Khabarovsk over disputed charges against the governor, “the prospect of another reason for Russians to protest on the streets will be deeply troubling for Putin,” says Noble.